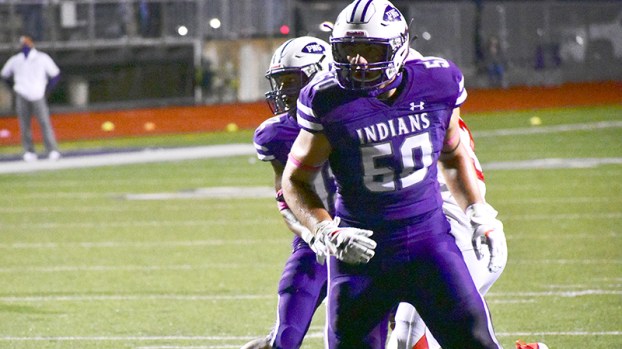 PNG seniors including Corey Burt (50) will take to The Reservation field for the final time tonight. (I.C. Murrell/The News) 10-8-20

PORT NECHES — The Port Neches-Groves Indians need a little help to extend their playoff streak to eight years. The last time the program missed the playoffs was 2012, after a 2-8 season.

Texas City took control away from PNG last week when it defeated the Indians 60-34 in a rain-soaked game.

“We have to control what we can control,” PNG head coach Brandon Faircloth said. “That is playing our best game Friday night by beating Santa Fe. The approach is the same in the fact that you need a whole week to beat somebody. We have to come out and be ready to play.”

Faircloth said his team has bounced back well in practice after playing a physical game, where Texas City rushed for more than 600 yards.

“They have been resilient all year long,” he said of his players. “This is part of sports. Things aren’t going to go your way sometimes. The way we respond really shows our character, and we have been responding to adversity all year by going back to work. They came in on Monday ready to go, and I am really proud of that.”

The Indians have more on the line than a playoff spot.

“It’s our seniors’ last game at home,” Faircloth said. “There is a lot on the line there. We want to send our seniors out with a win. We have a great senior class and we want to have a great game one more time at The Reservation. We have had a great week of practice. We are just making sure we are ready to play and put our best foot forward on Friday.”

Port Neches senior offensive lineman Corey Burt said he is excited to play at The Reservation one last time.

“Playing in front of the crowds has been pretty wild,” he said. “Looking up and seeing every person has been crazy. It’s been nice to have that kind of support and energy.”

Barbers Hill is already locked into a playoff spot but would drop to the fourth seed with a loss to Texas City. Texas City has won its last two games while Barbers Hill has won three out of its last four.

Santa Fe’s lone district win came in a 56-35 victory over Dayton, which has not won a game all season.

The Centers for Disease Control and Prevention has allotted more than 1.4 million doses of COVID-19 vaccines to the state... read more