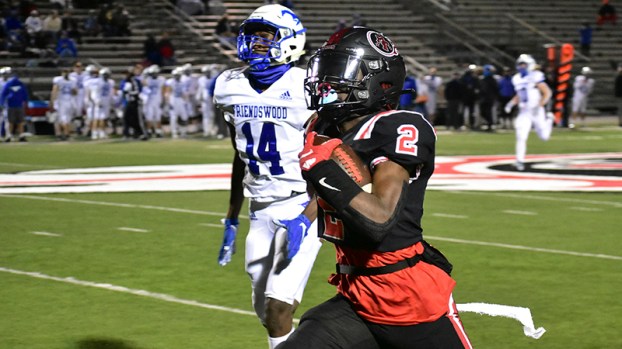 Tyrence Augusta (2) of Memorial jets for a long touchdown catch-and-run against Friendswood in the first quarter Friday in Port Arthur. (I.C. Murrell/The News) 12-4-20

The Memorial Titans capped off their first undefeated regular season in the school’s 19-year history with a 46-28 win over Friendswood at Memorial Stadium on Friday.

The Titans are the first Port Arthur high school football team to go undefeated in the regular season since the Stephen F. Austin team of 1993.

“It feels really good,” Memorial head coach Brian Morgan said. “It is really hard to win football games every week. Each team prepares to beat you. It is not easy to win any week, no matter who you are playing and what their record is. Friendswood came out and played really well. It was good to win and go out on a positive note going into the playoffs. That is fun to be the first one.”

Some of the Titans’ key players got some rest, as University of Texas commits Jaylon Guilbeau and Jordon Thomas did not play in the win.

Neither appeared to be injured and were moving around fine on the sideline. 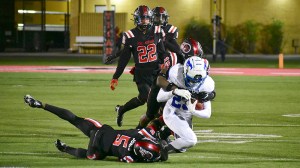 The Mustangs jumped out to an early 7-0 lead after using four plays to cover 61 yards on their opening drive. After that, the Titans outscored Friendswood 26-7 to end the first half.

Memorial scored on plays of 66, 46 and 55 yards. The first was a screen pass to receiver Tyrence Augusta and the latter two were runs by quarterback Jah’mar Sanders, who ended the first half with 103 rushing yards on eight carries and 11-of-16 for 222 yards and a passing TD.

“I was just following my line,” Sanders said. “We have the best line in the district and I trust them a lot.”

On Memorial’s second drive of the game, down 7-0 and having already been forced to punt once, Sanders threw a quick screen to Augusta, who took it 66 yards for the Titans’ first touchdown.

The Titans would miss the extra point, but the spark was enough to ignite the district’s top offense.

Even without two of its stars, Memorial’s district-leading defense made plenty of plays, forcing five turnovers (five fumbles and an interception by senior safety Maleek Jones). The defensive back also recorded a sack on the game.

The entire Titans team for completing the perfect regular season. The Titans could not improve or hurt their playoff seeding, but still found enough motivation to play for the undefeated slate.

“This is really big for the town,” Sanders said of the undefeated season. “I really don’t get into it. I’m just playing a role.”

Despite two interceptions, Sanders had one of his best games of the season with 15 carries for 105 yards and completing 17-of-27 for 352 yards and six total TDs (two rushing and four through the air).

On senior night, senior receiver Tony Brooks had seven receptions for 105 yards and a pair of scores.

“I wanted to challenge him this week,” Morgan said of Sanders. “I knew they had a really talented quarterback and you hear a lot of comments about Jordon and Guilbeau and whoever. In my eyes, every week, Jah’mar Sanders is the best player on the field. It’s week in and week out. He proves that point every single week, whether it is throwing the ball or running it.”

The Titans will host Fort Bend Hightower in the bi-district round of the playoffs 7 p.m. Friday at Memorial Stadium.