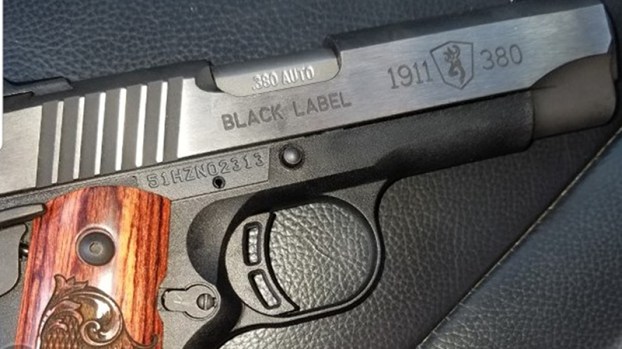 This handgun — a .380 gun that looks like a .45 — was stolen from an unlocked vehicle in Port Arthur. The owner took a photo of the gun and recorded its serial number, which was provided to police after the burglary. Courtesy Photo

Dozens of stolen Port Arthur firearms are getting into criminals’ hands. You can help stop it.

Stolen firearms often land in the hands of criminals.

One stolen Port Arthur gun was recovered on a suspected gang member who was killed in a drive-by shooting in Fort Worth.

PAPD compiled statistics showing there were 90 auto burglaries between Sept. 1 and Dec. 1 and of those 90, 32 firearms were stolen.

The vehicles in which the 32 firearms were taken were not locked.

Two areas have seen the highest amount of auto burglaries in the city, and police refer to them as District 1 and District 2.

District 1 is comprised of the Port Acres, El Vista, Montrose areas and part of the businesses/back side of Walmart on U.S. 69.

District 2 includes the Central Mall area, Stonegate and the majority of the apartment complexes from U.S. 69 to Twin City Highway.

“About 80 percent of all auto burglaries occurred in Districts 1 and 2,” Hebert said.

PAPD statistics show of the 32 firearms stolen, 28 were handguns and four were long guns — all stolen from unlocked vehicles.

The majority of the auto burglaries are happening in the evening hours. On average, those in the RV parks and hotels in those districts are reported as occurring between 11 p.m. to 5 a.m. Those occurring in the restaurant parking lot areas reportedly occur between 4 and 10 p.m.

Hebert said this isn’t just a local crime. PAPD remains in contact with Mid-County agencies and they, too, are having problems with firearms stolen from unlocked vehicles.

PAPD is asking the public to lock their vehicles.

Hebert said they are not asking people to hide their firearms or put them in a lock box.

“Most of this occurs, in talking with the victims, when they are in a rush or they are tired when they get home, getting off work,” Hebert said. “We are asking people to make a concentrated effort when they go home or go to a business, their apartment or motel, to lock their car doors.”

A way to aid police is to take a photo of the firearm and record its serial number. Hebert provided a photo of a unique gun that looked like a .45 but was actually a .380. The gun was later stolen but the owner provided police with the photo and serial number. That info is placed in a system and if it shows up, can be recovered.

“It makes the hunt for these guns a lot easier,” he said. “If an officer in another county or city finds a gun, he or she can run the information through an Alcohol, Tobacco, Firearms and Explosives agency system, which can sometimes track the gun back to the store it was purchased and to the owners hands.”

Hebert realizes sometimes people are exhausted when they get home and asks the city’s gun owners to help police by locking their vehicles.

Businesses in Jefferson County and throughout Texas eligible to maintain up to 75 percent of maximum occupancy may soon have... read more