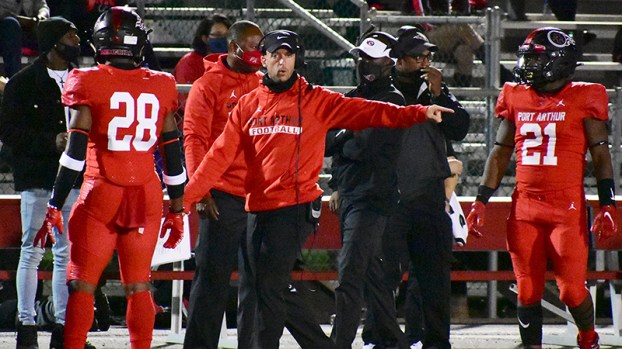 After clinching an outright District 9-5A Division I title with a 39-8 win over Baytown Sterling Friday, the Memorial Titans have a bye week before their season finale against Friendswood Dec. 4 at Memorial Stadium.

One more win would give Memorial the first perfect regular season in the school’s 19-year history.

Memorial head coach Brian Morgan said the Titans (8-0, 6-0) celebrated the district title over the weekend before refocusing on the task at hand.

“It was good this weekend, but the guys came in (Monday) and kind of forgot about it and were ready to get to work,” Morgan said. “We didn’t talk about and really haven’t said anything since Friday night. Friday night was actually the first time we talked about it. That was the first time they had heard it and they were excited. After that, it was time to get back to work.”

Morgan said the team had high expectations heading into the season.

Morgan said having a bye week before a playoff run helps some guys recover from the rigors of a long season.

“It’s big. That was probably the first game we got a few nicks and bruises that we need to recover from,” he said. “We really haven’t had anything all season. Now, we have a few and it will be nice to spend some time to recover.”

The head coach said mental recovery is just as important as physical.

“I told our guys, especially with district wrapped up, it is important to get our guys mentally recharged,” he said. “They have been grinding for a long time. Going back to January, they have been getting after it. We want to use this week to get them refreshed so that they come back next week hungry.”

The Titans will spend the bye week doing some light practices.

Morgan said the team rarely has padded practices during the back half of season.

“We didn’t practice at all (Monday),” he said. “Tuesday, we practiced for about 30 minutes and Wednesday, we go for about 45 minutes. We aren’t even putting helmets on. We just want to keep them running a bit. When I say I want them mentally recharged, I want them to come back next week hungry to be on the field and not feel like it is a task.”

Bye week for all teams

PORT NECHES — Coming off a gut-wrenching loss to the district-leading Crosby Cougars, the Port Neches-Groves Indians will look to... read more