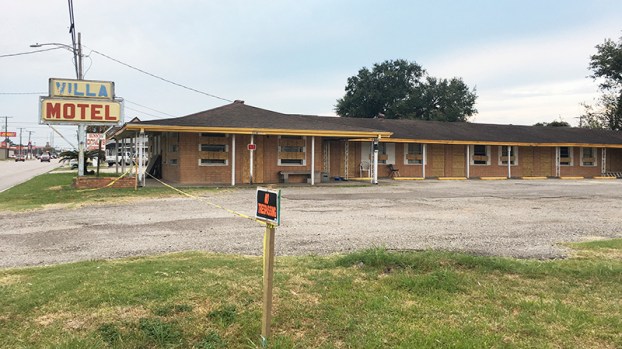 NEDERLAND — The dilapidated one-time Villa Motel on Nederland Avenue could be torn down and flattened to green space by the end of the year.

The Nederland City Council is expected approve demolition of the structure at 1132 Nederland Avenue during its next scheduled meeting Dec. 7.

The Nederland Economic Development Corporation recently purchased the building and land it sits on for $300,000 and is looking for $31,858 in demolition fee approval.

EDC executive director Kay DeCuir joked that she is tired of driving by the structure each day to make sure its no trespassing signs and barricades are still up while she remains focused on creating a location enticing for sale to a private entity interested in bringing in economic development and job creation.

“(After demolition) we will have a ‘for sale’ sign made and it will be set up on the property,” DeCuir said. “We will start letting whoever is interested in building on it put in an offer and go from there. Everything has to go through the (EDC) board. We are not going to take less than what we paid for it, plus demo. We don’t want to make money. That is not the goal. The goal is to get our money back.”

The location is .32 of an acre, or 14,000 square feet, and is zoned commercial, meaning apartments or duplexes are not development options.

“We would like to know what people have planned to go there to see if we feel like that is going to be good for our community,” DeCuir said. “The purpose is job creation. Is it a business that wants to expand? We would love to see a strip center or a little restaurant. We are hoping people will bring to the table things that we need. It is wide open at this point and time.”

Once authorized, demolition is expected to take two days, with a return to green space completed within three weeks.

City Manager Chris Duque said Nederland’s buildings and inspections department can issue the demolition permit once the asbestos survey is completed in observance of Texas Asbestos Health Protection rules. Those results had not been provided as of Monday.

During this month’s city council meeting, Councilman Billy Neal asked officials to make sure all rooms had been cleared of potential transient residents squatting in the building.

DeCuir previously told Port Arthur Newsmedia that realtors representing national franchises approached city leaders about large-space areas for development, only to be frustrated by a lack of options along Nederland’s busiest roads.

Port Arthur Newsmedia requests for comment to the councilman representing the motel area and mayor about their thoughts on economic development in the region were not returned as of press time.

Sheriff’s Office: Use these safe shopping tips to avoid becoming a victim