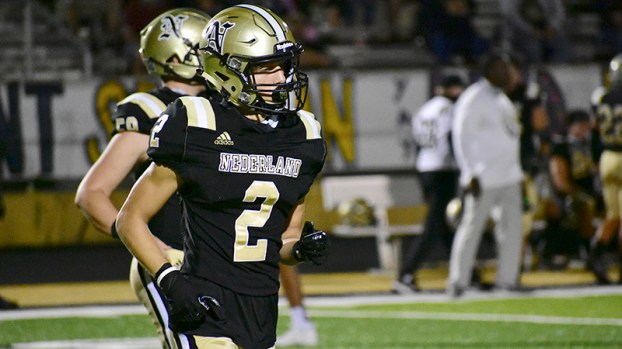 NEDERLAND — Coming off a highly charged overtime win over Barbers Hill, the Nederland Bulldogs are trying not to get caught looking behind or ahead as they take on Kingwood Park on Friday.

Kickoff is set for 2 p.m. at Bulldog Stadium.

“We told them that this is a new week,” Nederland head coach Monte Barrow said. “Our goals are still intact. We want to play for a district championship. That cannot happen if you are looking at that game and do not take care of business this week.”

Kingwood Park has plenty to play for.

With two games remaining, the Panthers are sitting one game outside of the district’s playoff picture.

“The first thing we told (the team) is that Kingwood Park can beat anybody,” Barrow said. “They are well coached and are like a machine offensively. We are going to have to be at our best like any other game in our district. They are not out of it either. They are playing for something as well.”

Barrow said he uses the upcoming game against Crosby as motivation but said there is a balance.

“It’s not looking ahead,” he said. “It’s just the reality of the situation. We are not going to lie to them. We want them to know what is in front of them. What you don’t want is all of the things the win last Friday gave us to go out the window because we were looking ahead and not taking care of business.”

Kingwood Park is coming off a 27-18 win over Santa Fe.

With the Panthers ranking in the bottom half of the district in offense and defense, the game could likely come down to turnover differential. The Kingwood Park defense is second in the district with seven interceptions, trailing Crosby (eight).

Nederland quarterback Rene Cunningham is coming off a four-interception game against Barbers Hill. Cunningham had only thrown one pick prior to last week.

He will have to do his best to avoid Panthers junior Graycen Adrian, who is tied for the district lead in interceptions with three.

Adrian also leads the district in kick return average (25.18) and is second on the team in receiving yards with 263 on 21 catches and a touchdown.

Kingwood Park’s biggest offensive threat is senior quarterback Hudson Dezell, who leads the team in carries with 112 for 381 yards and 10 touchdowns.

Nederland enters the game with the district’s most dynamic and explosive offenses, led by running back Josh Mazyck, who leads the district with 8.25 yards per carry. He is second in rushing yards with 908 and rushing touchdowns with 13.

Cunningham leads the district in yards per passing attempt with 10.4, with second place going to Port Neches-Groves quarterback Blake Bost (6.78).

Bulldog receiver Kyndon Fuselier leads the district with 23.65 yards per catch and 11 touchdowns and is second in total yards with 804.