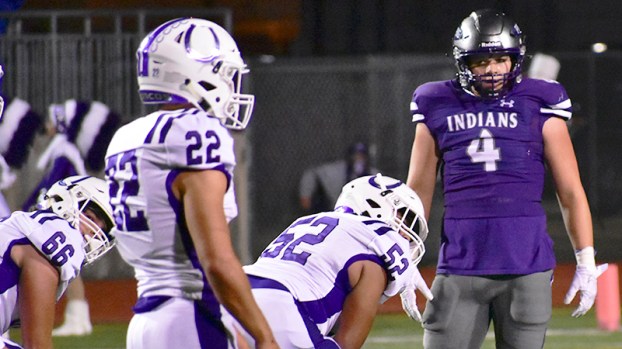 While he is listed as a backup quarterback for the Port Neches-Groves Indians, fans can find senior Brooks Barnwell all over the field on Friday nights.

He credits his quarterback knowledge as the key to being a successful pass rusher.

“As a quarterback, you have to know everything about the offense,” he said. “When you know the way an offense works, it makes rushing the passer easier.”

The senior ranks the joy of scoring a touchdown ahead of getting a sack. However, his dream play scenario would come on the defensive side of the ball.

“I really want to score a defensive touchdown,” he said. “I’m trying. That is one of my goals.”

Head coach Brandon Faircloth said the three-year starter’s leadership is one of his best traits.

“He has a lot of experience,” Faircloth said. “He has been on varsity. Not many guys can say they have scored a rushing touchdown and recorded a sack on Friday night. He is very versatile. He has also played fullback for us this year. He brings a lot to our team, and we have been able to move him around.”

“He is a quicker guy,” he said. “He is undersized for the position, and I’m a little undersized for my position but I try to make up for it with my quickness and my speed.”

The defensive lineman said his most memorable moment playing football came this year when he sacked Nederland quarterback Rene Cunningham during PNG’s 22-21 last-second win over the rival Bulldogs.

“I hit the lineman with a swim move,” he said. “I swam over the guard and was able to get back there pretty quick. It felt unreal. It was crazy. I had so many emotions going through me when I made that play.”

When not harassing opposing quarterbacks, Barnwell is usually working out, hanging out with friends and enjoying his senior year.

He will also be lining up as a forward for the PNG basketball team.

“I like both sports equally,” he said. “It just depends on what season it is. I’m always ready for both of them.”

Barnwell will look to increase his sack total when the Indians play Texas City on Friday.

If a couple more putts had dropped last weekend in the RSM Classic, Andrew Landry would have pulled off one... read more