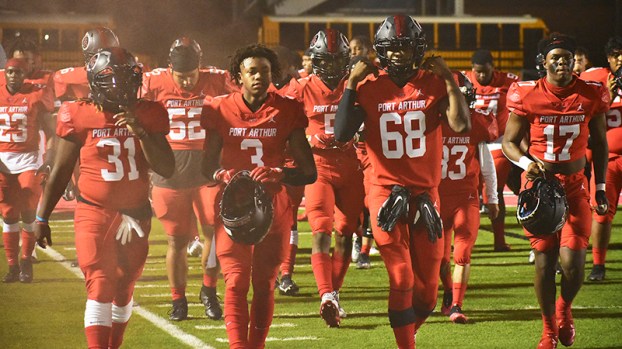 Memorial players line up for the National Anthem after taking the field before the Nov. 13 home game against Baytown Lee. (I.C. Murrell/The News)

The high-powered Memorial Titans could solidify, at least a share of the District 9-5A Division I title with a win over Baytown Sterling tonight.

However, Memorial head coach Brian Morgan, who said he has little interest in a district championship as playoffs loom, said his undefeated team is only worried about winning the next game.

“I’m trying to have a good week of practice,” he said. “I haven’t talked to the kids about it. I’m not going to bring it up. We are not playing for a district championship. We are trying to get ready for Sterling.”

The Titans, who lead the district in offensive yards per game and defensive yards allowed per game, are the prohibited favorites heading into the contest.

Three of the Rangers’ district losses were one-score games. Outside of their 38-7 loss to Beaumont United, the Rangers have lost three games by a combined 11 points. Their lone win came last week in a 24-14 victory over winless Galveston Ball.

“Most of their games have been close losses,” Morgan said. “They don’t really give up a lot of points on defense. They do some things that can confuse you and get you into some negative plays.”

Morgan said Sterling plays a multiple-look defense, which means it can come out in different formations, making it more difficult to prepare a game plan.

“They have a couple of good players,” he said. “We have to go out and execute. We can’t just go out and show up. We have to play. We don’t have school that day, so it is another challenge to keep kids focused.”

The Rangers fare better on the defensive side of the ball, averaging around the middle of the pack in yards allowed among 9-5A-I teams.

Morgan believes his top-ranked defense should be able to have a successful night. The Titans’ defense could make the Rangers attack more lopsided. Memorial’s top-ranked pass defense only allows 83.3 passing yards per game. They are the only team in the district to allow fewer than 100 ypg.

The Rangers enter the game with the worst total offense in the district at 212 ypg (141 passing, 70 rushing). Sterling has scored more than 20 points twice this season, while the Titans have allowed opponents to score 20 points twice in district play.

Sterling senior quarterback Richard De Luna ranks fourth in the district in passing yards, but also tops the group in interceptions with 10. Three quarterbacks are tied for second place with four each. The Titans offense has only scored fewer than 24 points twice all year.

The Titans will likely try to avoid kicking it to senior return specialist Cedell Wright, who is second in return yards with an average of 34 yards a pop and has a 91-yard touchdown as well.

NEDERLAND — With one district loss on the season, the Nederland Bulldogs still control their own destiny when it comes... read more