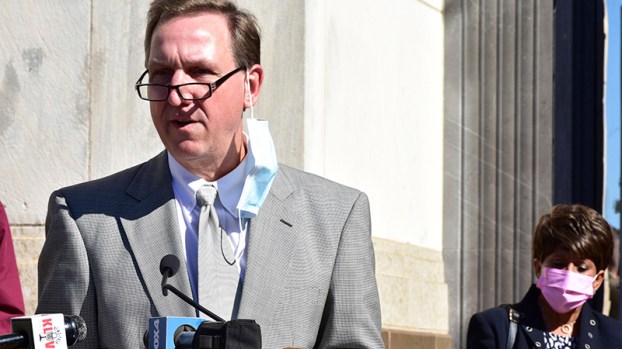 Jefferson County Judge Jeff Branick has said it all along, and he repeated it during a Wednesday news conference: He has no desire for anyone who doesn’t follow simple coronavirus protection protocol to be arrested or cited, although county and state mandates call for that.

Amity Beck of Lumberton doesn’t think a lack of wearing facemasks should be so criminal.

Beck regularly visits her grandmother through a glass wall at a nursing home, and she says she sees workers putting a mask over the grandmom’s face.

“I say, ‘Oh, my gosh. That’s just so wrong,’” Beck said. “I want to see her face. She wants to see my face so we can talk to each other, so she doesn’t die of loneliness. That’s what we’re missing out on.”

The idea of wearing a mask, many would argue, goes beyond loneliness. In Beck’s case, it’s a matter of perception toward one who would rather not wear it.

“It’s not humane to separate us and to make someone wear a mask to fear me or for me to fear someone else,” she said. “Masks should be for someone who is ill or whose health is compromised. If they choose to wear it, that’s fine. But what’s not being said is how to properly wear it or how not to properly wear it. There’s so much not being said that’s being covered by, ‘You’re a nice person if you wear a mask and you’re an unloving, uncaring person who wants to kill everyone around you if you don’t.’”

Well, maybe it’s because no authority in his or her right mind is saying that.

Granted, death by showing one’s own face is as novel an idea for a crime as coronavirus itself. (We’ve only been in a pandemic for, oh, let’s say, eight months now.)

Surely if Branick felt as strongly as Beck, he’d establish more stringent protocol. He was pressed about the possibility of that and said he’s not interested in using law enforcement resources to arrest or cite those who don’t wear masks.

“I don’t know if, at the end of the day, years from now, we’re going to find out through studies that masks were appropriate or inappropriate, but I do know when I go to the hospitals that doctors and nurses dealing with infectious diseases are wearing those masks — it’s like during a hurricane, when we issue an evacuation order, we’re certainly not trying to go out and arrest people who choose not to evacuate, but we think it’s in the best interest of public safety and people would be best served by following those suggestions,” Branick said.

That comment came early in a 30-minute news conference that was slightly extended by questions from a group of 11 persons — 10 women and one young man — challenging the health leaders on policies on wearing masks and social distancing, among other preventative measures. A young man held the only visible poster, which read: “NO MORE TYRANNY. FACTS NOT FEAR.” (“TYRANNY” was double-underlined.)

The conference included local health and government officials from seven Southeast Texas counties warning people to guard themselves against COVID-19 as the holiday season approaches, a prudent service to the public. For the protesters, it was a chance to try the case these health experts have made since March in the court of public opinion — outside the steps of Judge Branick’s workplace, no less.

But neither Branick nor any of the officials were there to rule at that moment. It was a news conference, for crying out loud!

At least one woman from the group who asked a question did not want to be identified. Beck did, obviously.

She stated her case this way:

“The masks represent a tyrannical oversight of my freedoms. There’s a right place to suggest it is appropriate for some people, but to say it’s appropriate for everyone and put a 2-year-old in a mask for hours upon end over these children is inappropriate,” she said.

With respect to free speech, of course, just as inappropriate would be not knowing how to prevent the community spread of a novel virus. Hence, a news conference was staged.

As uncomfortable as that little cloth over every nose and mouth is at times — heck, I’m not a fan of constantly wearing it but I do — it’s nothing that should communicate fear for one another or anything. It’s just that coronavirus is trying to hurt us, and some of us just want to fight back for the greater good.

Judging from Branick’s stated desire, it’s not like those who won’t comply will have the book thrown at them.

“As far as I know, no one not wearing mask has been met with an arrest or a citation, but I think it’s a considerate thing to do for the members of our communities who are more at risk,” he said.

So, those leading us in the fight should not be tried in the court of public opinion.