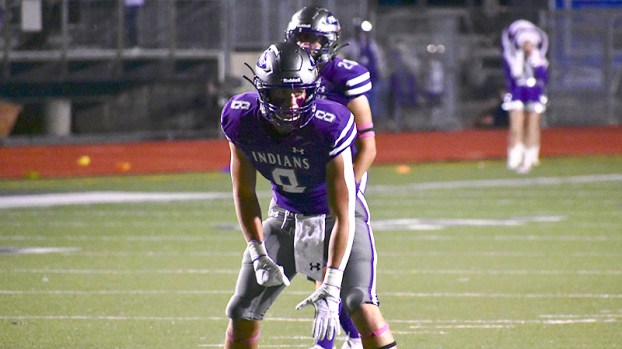 Even though his primary job now is to rush the quarterback, head coach Brandon Faircloth said Sullivan’s versatility is what led to him having a team-high two interceptions on the season.

“He’s a great leader and a great player,” Faircloth said. “He has been on varsity since his sophomore year. He brings a lot of experience. I’ll tell you what he is. Relentless. When he is out there on the field, he is relentless. It doesn’t matter if it is first-and-10 or fourth-and-2, you get the same effort out of him. He is trying to get to the football.”

That tenacity helped jumped start the Indians’ 42-20 win over Dayton Oct. 30 when Sullivan got his second pick of the season to end the Broncos’ opening drive.

Sullivan was an All-District 12-5A Division II player and named to the Port Arthur News Super Team for the 2019 season.

Out of all of his numerous positions on the field, Sullivan  likes outside linebacker the best.

“I’ve been all over the defense,” he said. “I like outside because I get more pass (drop backs). That is how I got both of my picks. I get most of my tackles out there, too.”

“We can put him in different spots during the game to help take away whatever we want to take away that week,” Faircloth said. “When you have a guy like him, it simplifies things.”

Sullivan said his favorite football memory has been when he ran out of the tunnel for his first time on varsity his sophomore year.

“I didn’t even play that game, but I remember the first time running out,” he said. “I just remember running out and looking up and seeing all of the fans and everyone was just looking at you. It was pretty cool. It was a moment I had been waiting on my whole life.”

When he is not hunting the football, Sullivan can be found hunting ducks, playing outfield for PNG and coaching his little brother’s little league basketball team.

Sullivan and the PNG defense will try to slow the district’s top team and second-ranked offense in Crosby. Kickoff is set for 7:30 p.m. Friday.

Blake Bost, coach proud of “team award” that is Player of Week honor