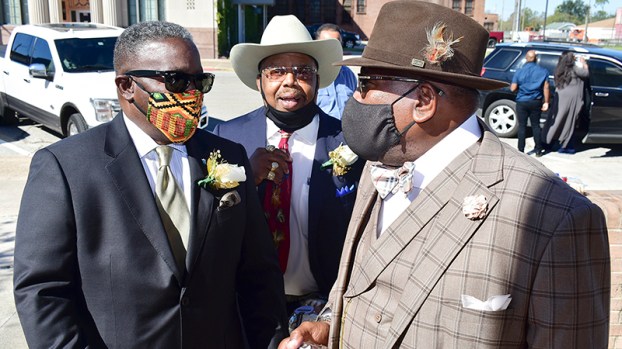 Following the canvassing of the Nov. 3 general and special election returns in Port Arthur, Kenneth Marks took his seat on the city council dais Tuesday while three incumbents were sworn into their second term.

He was sworn into the council as the city’s governing body met in the council chambers at city hall for the first time since the onset of the coronavirus pandemic in March.

“Not one person can do this by themselves,” Marks said. “It’s going to take a cooperative effort to move forward. We’re going to have to agree to disagree without being disagreeable and make sure we take care of the citizenry of our city.”

Marks is looking forward to finding out from the council and Mayor Thurman Bartie what the city’s most immediate needs are, citing “I-R-A” — infrastructure, revitalization and accountability — as his platform.

In his final comments from the dais, Doucet thanked the citizens of Port Arthur for electing him. He served a previous term before a 2013 ordinance limited councilmembers to two terms in one position.

“I served two different times,” Doucet said. “The first time I came on council, I had a platform for streets, sewage and drainage. When I left, we still had that problem. No money, they said. When I left council, I felt empty. I felt I didn’t get to do the things I told citizens I would fight for.”

Doucet ran again on the same three platforms in 2017 and was elected.

“As I leave this time, I know for a fact the answer is not going to be ‘no money’. All three issues have been addressed,” he said.

Known for his knowledge of city policy and council procedures as well as his open disagreements on certain issues, Doucet received well wishes from his cohorts as he made his final comments from the dais.

Said District 3 Councilman Thomas Kinlaw III: “We had some heated battles downstairs, but when we came back upstairs, we came together.”

District 1 Councilman Raymond Scott, who is running for at-large Position 8 since he is term-limited in his current seat, told Doucet he learned from him how to maintain integrity while serving on the council.

“It’s not about how many people vote with you. It’s about what you stand for,” Scott said. “My main objective is that my citizens are first, and that my city is first.”

At-large Position 7 Councilwoman Charlotte Moses, along with Jones and Kinlaw, were sworn into their second full terms Tuesday. Moses was first elected in 2015 to fulfill the remainder of Derrick Freeman’s term after Freeman successfully ran for mayor.

Two runoffs are scheduled for Dec. 19 to complete the council in time for 2021. Scott is challenging PAISD board member the Rev. Donald Ray Frank Sr. for the Position 8 seat. Incumbent Kaprina Frank has reached term limits at that position.

Early voting for the runoffs is scheduled for Nov. 30 through Dec. 8. Votes will be canvassed Dec. 30.

The Port Neches-Groves Independent School District canvassed the results of the Nov. 3 election for Place trustee Monday, and Dallon James will be sworn in to that position at the start of the Dec. 14 regular meeting.

James won with 43.83 percent of the votes over incumbent Rusty Brittain and Danny Viator Jr. A plurality election is used in the PNGISD, meaning the winner does not have to attain 50 percent or more of the vote.

CHRIS MOORE — Not time to let guard down against COVID-19

The end of the year typically is a time for celebration. Families gather for the holiday season to spend valuable... read more