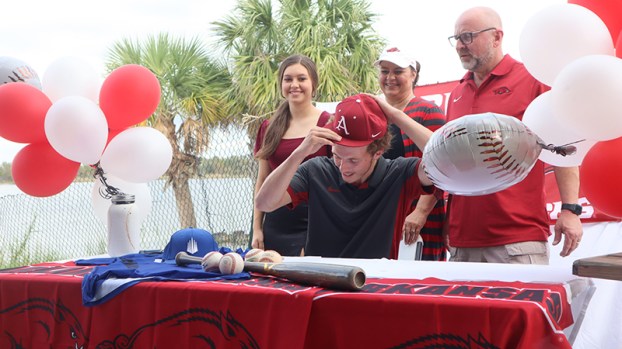 Port Neches native Drake Varnado, surrounded by his family, chooses the University of Arkansas as his destination to play college baseball during an event in 2020.

PORT NECHES — Port Neches native Drake Varnado signed a letter of intent to play baseball at the University of Arkansas on Saturday.

Varnado, who has been attending IMG Academy in Bradenton, Fla., celebrated the occasion with family and friends at Neches River Wheelhouse.

“It means a lot,” Varnado said of the signing. “It’s been a long time coming. I’m really looking forward to the next level.”

Varnado is in his senior year at IMG Academy after spending his sophomore year Kelly Catholic and his freshman season at Port Neches-Groves.

“It has been awesome,” Varnado said of his experience at the Florida boarding school. “At first, it was a little different, being out of the house at 16. Not having my parents and family was tough, but I got a routine down and started getting after it.”

Varnado said the coaches and facilities at Arkansas helped make his decision. He had committed to South Carolina after his freshman year and had several other colleges recruiting him.

“The facilities (at Arkansas) are second to none,” he said. “The development they put out every year is crazy. There is no better atmosphere than Baum-Walker Stadium. They are the best fans in college baseball.”

Varnado’s dad Lloyd Varnado said he was happy to have his son home and enjoy the occasion.

“As parents, you love your kids and you miss him, but we know he has to do that to prove he is responsible at the next level,” Lloyd Varnado said. “I probably ask him once a week if he is really my son and where this came from. He has really stepped up to the plate. He’s done really well. He is a humble kid and understands what his goals are.”

As with many promising prospects, playing college ball is not a guarantee.

The MLB draft is set for July 11-13 and several sites have Varnado listed as a prospect worthy of a draft selection. The only thing that remains to be seen is where the 6-foot-2, 175-pound shortstop lands and if that will be the right fit for him to forgo his college career.