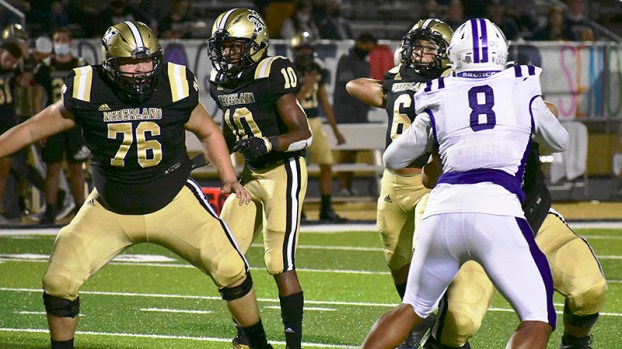 Jack Bieber (76) has been a mainstay on an everchanging Nederland offensive line. (I.C. Murrell/The News) 11-13-20

NEDERLAND — For the first time this season, the Nederland Bulldogs will have the same starting offensive line for two consecutive games when they line up against Barbers Hill on Friday.

Head coach Monte Barrow said the line was the unit most impacted by the COVID-19 outbreak that caused the team to miss their week 1 matchup.

Injuries and poor grades have also impacted the group.

“The line that played last week was the group that was projected to be our starters,” Barrow said. “The guys that have played, whether it has been one week, two weeks or every other week, have done a really tremendous job in my eyes based on what that job requires.”

Barrow said it can sometimes take seven or eight weeks before a line really jells.

“The fact that we have had some success offensively with (quarterback) Rene (Cunningham) and (running back) Josh (Mazyck) — it all goes with that offensive line,” Barrow said. “They have really battled, dug in and helped our offense.”

Barrow said eight players have started in various positions on the line since the Bulldogs’ first game against Lufkin.

“I give credit to these guys,” Stoker said. “They come in and work every day. What we do isn’t complicated, but it does take some thought to be able to understand the scheme. Craver has practiced at every position at some point. He is the starting left tackle but he started the season at right guard.”

“We’re all friends,” he said. “We are always hanging out with each other outside of school. We’ve known each other for a really long time. It helps in the game, because we know how to communicate with each other.”

Bieber said the unit’s lone senior, Jack McGuire, is like a big brother.

“(When we are not playing football), I’m either giving everyone a ride home or we are all playing with each other on the video game,” McGuire said.

While there is some dispute over who is the best video game player, they both said their line’s trust in one another is what drives them to be better.

“I’ve stressed that they have to be close since the first day,” Stoker said. “I know from personal experience playing on the line and coaching it now that that is very important. We spend more time together than any other position there is.”

Even with the fluid line, the Bulldogs have had success on offense.

Running back Josh Mazyck leads the district in rushing with 781 yards on 102 carries and 12 touchdowns. Against Dayton on Nov. 13, Mazyck had 167 yards rushing and three touchdowns.

The group hopes to keep the ball rolling as they take on Barbers Hill in Mont Belvieu on Friday.