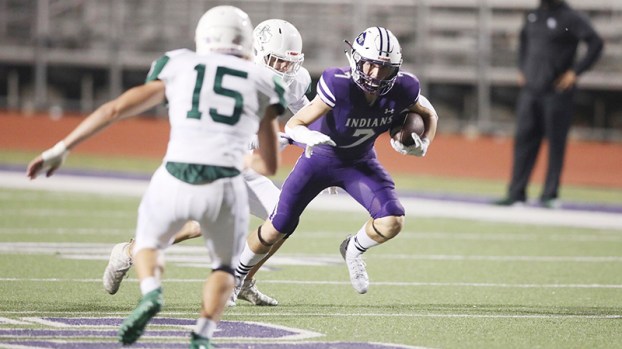 Bost completed 20 of 26 passes for 234 yards and four touchdown passes. He also rushed for 127 yards on 17 carries and three more TDs.

Lance Vaughn added 143 yards on 13 carries and a touchdown. He also caught four passes for 53 yards, including one that went for a 16-yard TD. That is two solid outings in a row for Vaughn, who had 150 yards rushing the previous week at Barbers Hill. 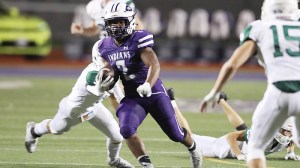 PNG’s offense picked up where it left off in the second quarter, putting together another scoring drive. Vaughn rushed for 15 yards on the first play from scrimmage and added a 31-yard run two plays later. Bost hit Brady Nail on a 9-yard pass play to push the Indians lead to 35-14 with 7:57 left in the third quarter.

KP’s offense struggled on its next possession. The Indians took advantage of the good field position and scored in three plays. Dejaunte Conner rushed for 32 yards to the KP 2. Bost called his own number on a 2-yard QB sneak to make the score 42-14 with 5:55 left in the third quarter.

The Panthers put together a 10-play scoring drive on their next possession. It was a steady diet of Juan Garcia running the ball with 54 yards on four carries. Hudson Dezell hit Patrick Overmyer for a 14-yard TD to make the score 42-21.

PNG seemed to be able to score at will against the Panthers. The Indians answered KP’s scoring drive with one of their own. Bost capped the drive with a 16-yard TD pass to Vaughn to push the lead to 49-21.

The two teams exchanged touchdown drives early in the fourth quarter. Dezell scored on a 7-yard run for the Panthers. Bost hit Pearson on a 25-yard touchdown completion for the Indians to make the score 56-28.

KP added another score with 4:05 remaining in the fourth quarter. Cody Floyd scored on a 6-yard run to make the score 56-35.

Vaughn closed out the scoring for the Indians on a 10-yard TD run to make the final score 62-35.

On PNG’s second drive, Bost took to the air, completing a 14-yard pass to Vaughn and consecutive completions to Brady Nail for 10 and 15 yards to put the ball at the KP 31. A 10-yard pass to Nail gave PNG first-and-goal at the 8. Bost scored two plays later on a 2-yard run to put the Indians up 7-0.

The Panthers answered right back on the ensuing drive. Juan Garcia opened the drive with three straight runs of 16, 6 and 6 yards. Following a 10-yard run by Dezell, Garcia scored on a 37-yard run to tie the game at 7-7 with 13 seconds left in the opening quarter.

PNG put together another scoring drive early in the second quarter. After forcing a three-and-out by the Panthers, the Indians took over at their own 49. Bost hit Vaughn for 17 yards to get the drive going. Bost rushed for 22 yards to the KP 13. Bost scored two plays later on a 6-yard TD run to reclaim the lead for the Indians at 14-7 with 7:24 left in the second quarter.

Once again, KP responded with a scoring drive of its own. The Panthers opened the play book when Dezell pitched the ball to Hayden Bender who then threw a 35-yard pass to Pierre Richards to the PNG 6. Dezell scored on the very next play to tie the game at 14-14 with 5:00 remaining in the second quarter.

It took only four plays for the Indians to strike back. Bost opened the drive with a 45-yard run. Bost hit Nail for a 3-yard gain and ran the ball for another 10. Dejaunte Conner followed with a 17-yard TD run to put the Indians up 21-14 with 3:16 left in the second quarter.

Bost hit Pearson for three straight completions. The first two went for 12 and 23 yards and the last one was a 15-yard scoring strike to give the Indians at 28-14 lead heading to the locker room at halftime. 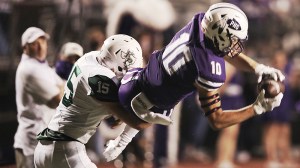 PNG scored twice in the final five minutes of the second quarter. The Indians broke a 14-14 tie with a 17-yard TD run by Conner at 3:16. After forcing a quick three-and-out, PNG scored again on a 15-yard pass from Bost to Pearson to put the Indians up 28-14 with just 1:48 left in the first half.

Senior Blake Bost who completed 20 of 26 passes for 234 yards and rushed for another 127 on 12 carries and accounted for seven TDs.

PNG’s Grant Pearson caught six passes for 106 yards and two touchdowns. KP was led by Hudson Dezell who completed 13 of 22 passes for 112 yards and rushed for 117 yards on 26 totes and 2 TDs. Juan Garcia led all rushers with 188 yards on 17 carries.

PNG hits the road next Friday for 7:30 p.m. game at Crosby. Kingwood Park returns home to host Santa Fe next Thursday at 7:30 p.m.