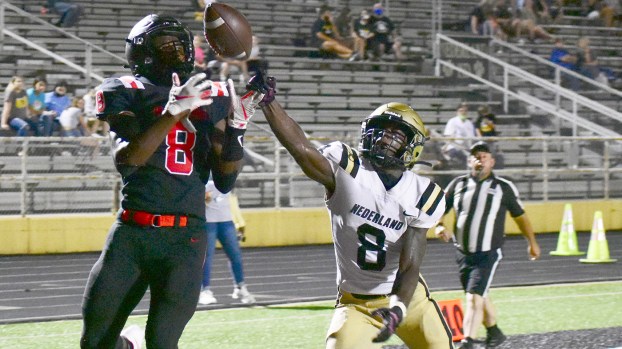 Memorial wide receiver Tony Brooks juggles and then catches a pass deflected by a Nederland defender in the third quarter of Thursday’s scrimmage. (I.C. Murrell/The News) 9-17-20

As we enter the homestretch of the high school football season, Mid- and South County’s three 5A teams each have interesting storylines for their respective fan bases to follow.

The Memorial Titans (6-0, 4-0 in District 9-5A Division I) are chasing an undefeated regular season by a Port Arthur ISD team for the first time since Stephen F. Austin in 1993 and the first for an area team since Port Neches-Groves in 2009.

The Titans are led by their dominant defense as they head into a matchup against Baytown Lee (5-1, 3-1), which is currently ranked second in the district. The Titans close out their regular season against Baytown Sterling (1-5, 0-4) and Friendswood (2-2, 2-4).

The Titans are led by 9-5A-I’s most dominant defense, which features two University of Texas commits in lineman Jordon Thomas and cornerback Jaylon Guilbeau. The Titans’ front seven continues to give opposing offensive lines nightmares, most recently dismantling the Beaumont United Timberwolves in a 20-0 decision.

Titans head coach Brian Morgan said his team is not thinking about the potential for an undefeated season. It is hard to imagine the Memorial fan base is not.

Both Mid-County teams still have to play Crosby in the coming weeks.

The Bulldogs are in control of their destiny in their quest for a district title. If Nederland wins out and Crosby loses no more than one game, the two would play for the district title in the final game of the season.

Getting to that point will not be easy, as the Bulldogs have to play Barbers Hill next week.

The next four weeks feature a bottleneck for the top spot in the district, and these games will determine who gets the title and the No. 1 seed.

Losing two of these next four games could knock a No. 1 seed to a 4-seed and knock a lower seed out of the playoffs.

Earlier in the season PNG coach Brandon Faircloth said each team looks at the schedule and tries to see the best way to four wins, which usually puts teams into the playoffs. With four games remaining, the Bulldogs and the Indians have two district wins apiece.

It’s time to tighten the chinstrap and put the fours in the air. I know that referring to this part of the season as the fourth quarter doesn’t work mathematically, but you get it.

We are in the end game now.

ASK A COP — Can I still drive with a missing passenger side mirror?

Kennedy from Vidor asks: I recently had a small fender bender, where my side view mirror hit a garbage can... read more