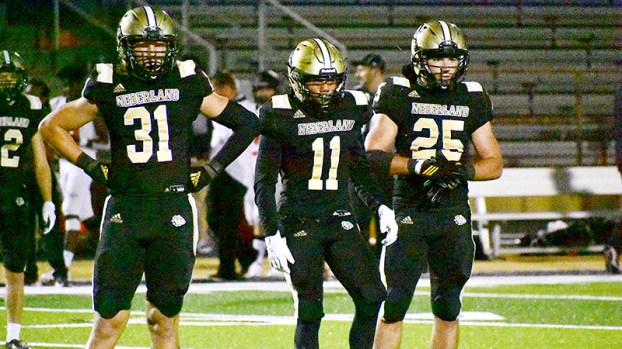 NEDERLAND — Over the last two games, the Nederland Bulldogs’ defense has allowed a combined 17 points.

One of the focal points has been senior linebacker Mikey Rangel, who was in on a sack during the Nederland’s 31-10 win over Texas City at Bulldog Stadium Friday night.

“I felt the pressure coming,” he said. “I saw our d-line really pushing. I was really locked in on the quarterback. I saw 31 (Landen Caywood) go get him, so I followed right behind him and I wasn’t going to let him get away. We were really focusing on gang tackling, especially with that type of offense.”

Rangel has been happy with the defense’s success but knows there is room for improvement.

“We have little bumps and bruises,” he said. “We just go back and look over the tape and fix what we need to.”

“He’s undersized for a linebacker,” he said of Rangel. “He doesn’t weigh much at all. What he has, he brings every tackle. He’s fearless on the field. He brings a lot of energy defensively. You want that from your linebacker. That energy he brings is invaluable to a defense.”

Barrow said Rangel is often around the ball trying to make a play.

“He is the type of kid that can go sideline-to-sideline,” Barrow said. “He can also run downhill, too. He does a great job of reading his keys and knowing how to get to the football.”

Barrow said this is Rangel’s second year on varsity.

“He played off and on last year,” Barrow said. “We’ve had different guys. He has solidified his spot there for sure. I’m glad he’s out there.”

The coach said Rangel is generally quiet, but unlocks a different side to his self on the football field.

“I think I have heard him talk more on the football field than off it,” Barrow said. “His friends might say he don’t ever shut up. He’s one of those guys that is smaller, but you don’t poke the bear. He has a tradition with our program. He has a brother that played here back in 2012. He’s aware of what being a Nederland Bulldog is all about.”

Rangel said he is more in his element on the field.

“Sometimes, you have to turn up a little more on the field,” he said. “I don’t want to hold back. We just have to play smart.”

Port Neches-Groves freshman Katherine Page advanced to the 5A state finals after finishing sixth in the Region III meet in... read more