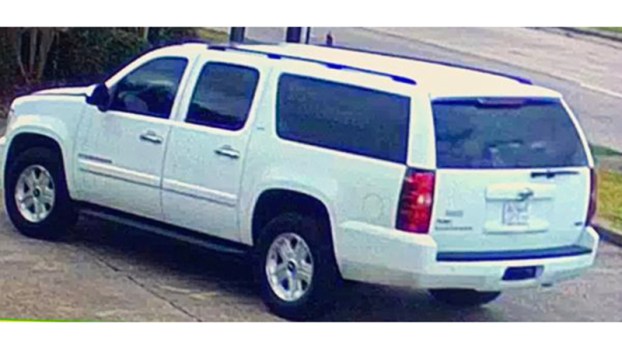 Police released this picture of a vehicle believed involved in a shooting at China Star Buffet, 4260 Dowlen Road in Beaumont.

On Tuesday at 12:50 p.m., Beaumont Police responded to the parking lot of China Star Buffet, located at 4260 Dowlen Road, in reference to a shooting victim.

Preliminary investigation revealed a restaurant patron was outside by his vehicle on the phone when a male pulled up in the parking lot.

It is believed the gunman robbed the victim, shot him and then removed personal belongings from him.

The gunmen is described as a black male in his mid-to-late 40s, driving a white Chevy Suburban with paper tags. The gunmen fled from the scene, toward Parkdale Mall.

The victim was taken to a local hospital with serious injuries.

Detectives are canvassing the area. If anyone has information about this crime, call Beaumont Police at 409-832-1234.

Detectives are also asking businesses in the area of Dowlen Road near China Star Buffet and Parkdale Mall to check surveillance cameras from noon to 1:30 p.m. today for this vehicle. If footage is found, call BPD.