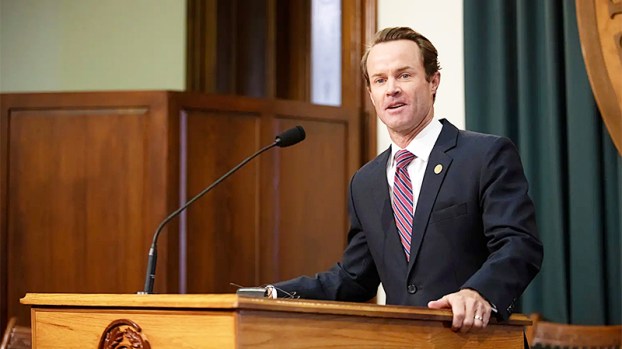 State Rep. Dade Phelan, R-Beaumont, held a press conference at the Capitol to declare that he had enough votes to become Speaker of the House on Nov 4, 2020. (Miguel Gutierrez Jr./The Texas Tribune)

Texas GOP Chair Allen West said Monday that the state party “will not support, nor accept” state Rep. Dade Phelan as the next speaker of the Texas House, after the Beaumont Republican said last week he has the votes to win the gavel.

In an email to supporters, West took issue with the fact that Democrats had backed Phelan even though Republicans retained a majority in the 150-member lower chamber after Election Day.

Phelan said last week he had support from a “supermajority of the Republican caucus” and a “broad coalition of support” from Democrats. That support, should it hold until January when the Legislature convenes, would mean Phelan has more than enough votes needed to become the next speaker when House members elect a leader as one of the chamber’s first orders of business.

“Texas will not allow the undermining of our ‘Texas Republic.’ This is why the Republican Party of Texas is perplexed, and will not support, a potential Texas Speaker of the House who would seek affirmation from progressive socialist Democrats to attain that position,” West wrote, calling it “utterly absurd and demonstrably idiotic” that a Republican would join with Democrats to lead the GOP-controlled House.

West does not get to vote on the next speaker since he is not a House member. And past speaker candidates, including current Republican House Speaker Dennis Bonnen, who will retire at the end of his term, have claimed support from Democrats in their bids to help get to a majority of votes needed to preside over the House.

Phelan, who has served in the lower chamber since 2015 and chairs the powerful House State Affairs Committee, did not immediately respond to a request for comment.

West and other Republicans have been critical of how Phelan’s speaker bid played out, arguing that it was not done as transparently.

Phelan filed paperwork to run for speaker after a group of GOP members gathered and picked the lawmaker as their preferred candidate. Phelan announced he had the support needed to win the race days later at a news conference at the Texas Capitol and hours after Republicans easily fended off a well-funded challenge from Democrats to flip control of the House.

A group of Republicans did not immediately sign onto Phelan’s list of supporters, though that seemed to change by the next day when state Rep. Geanie Morrison, R-Victoria, said she was dropping out of the race and backing Phelan.

The House GOP Caucus is still slated to meet in December, per its bylaws, to select a speaker candidate within the group and then vote as a bloc on the floor, though there is no enforcement mechanism. Phelan is expected to be the group’s preferred candidate.

West also argued that Phelan would appoint Democrats to chair House committees “who will undermine [and] kill our legislative priorities, as happened in the 87th Texas legislative session.”

Bonnen, who is retiring after a political scandal last summer, received criticism from other Republicans for tapping Democrats to chair high-profile committees, such as the House Homeland Security and Public Safety Committee.

“Texas will be led by Constitutional Conservatives, not middle of the road ‘road kill’ individuals seeking alliance with Marxist, socialist, leftists,” West wrote. “We fought hard in the 2020 election cycle — against massive odds and leftist resources — to retain a strong legislative majority.”

Texas gas prices lower than a month & year ago. See how much.