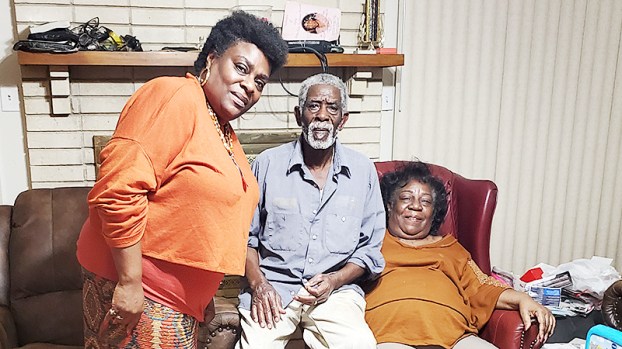 Trena Arceneaux, left, and Abram and Diane Ford pose for a photo in their Port Arthur home. Arceneaux is asking for the public’s help in solving the killing of her baby brother, Tremont Ford. (Mary Meaux/The News)

The sister of homicide victim Abraham Tremont Ford doesn’t believe in closure but she does believe in justice. 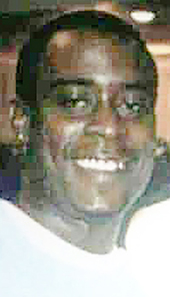 Trena Arceneaux is looking for someone to come forward with information about the Oct. 18, 2007, shooting that left her baby brother dead with multiple gunshot wounds in a car on Marshall Avenue.

Arceneaux, a veteran educator, performed her own detective work through the years, creating a timeline and sharing her information with the Port Arthur Police Department.

There has been a turnover in officers and leadership in the police department through the years and many of the officers involved then are gone now. She’s not sure what happened to the information she provided — if it was used to help solve the case or not, though she suspects the latter.

A man had been having a beef with 28-year-old Tremont, as his family called him, and the argument was “very, very deep,” Arceneaux said.

Diane Ford, his mother, said he sat on the bed and talked to her for two hours about the issue before he left that day. When Tremont left he was agitated because the man was texting him and threatening him. The threats were on Tremont’s phone, which he showed to his mother.

Tremont was playing a video game when he got a call from someone he trusted to go out, and he did.

“He wanted to do street stuff but wasn’t the street type,” his sister said with a slight laugh. “My mother worked for him. We’re all grown. She basically worked for him and nothing he did out there on the street he had to do except to be part of a certain group of people.”

Arceneaux believes Tremont was killed in one location by multiple shooters, then his body and car moved to the Marshall Avenue site.

She was blunt in the description of the crime.

“He was moved to Marshall and that’s why the car was open and crooked (on the street),” she said. “And with all the bullets they put in him, no windows were broke on the car. The bullets that went through his face, through his head, chipped his tooth, it was lodged nowhere in the car.”

During her personal investigation a man told Arceneaux he didn’t hear gunshots but saw a black car speeding from the area but didn’t pay attention to it until the police arrived.

And people who live where the car was fond did not hear gunshots either and it was October and no air conditioning was on, Arceneaux said, alluding to the idea his body and car were moved.

Diane Ford had given Tremont money in an envelope to pay bills with. The money was gone when the body was found. But when the vehicle was returned to his mother, the envelope was still there in the front seat when it should have been bagged up, Arceneaux said, adding the envelope had no blood on it.

At the time of his death Tremont had four children ages 8 and under.

He attended Abraham Lincoln High School and was in the class of 1997. He completed barber college at Majestic Barber Academy not long before his death. He had been looking for a building in which to open a shop.

“It was hard because he was the baby and they (Trena and Kary) and all their friends took him as their baby. Just to talk about it … we had pleasant memories and when we would talk, the next thing Kary was over there crying. He (Tremont) was an intricate part of our family,” Ford said.

Arceneaux laughed, recalling those days saying her baby brother was spoiled rotten by everyone, and she was a part of the spoiling.

He was gifted in cutting hair and did so from an early age. Children would line up to get a hair cut, his father Abraham said.

Besides gifted, he was prophetic, his sister said, and when the spirit rolled up in him to not do something, he usually didn’t do it.

Arceneaux’s own detective work has led to a list of possible suspects who took part in some way in the killing. Some are dead, some not.

One was killed by a bullet to the head, she said.

Another was burned in a car crash and died, though she has he doubts he is even dead.

One has sclerosis of the liver and cancer.

One has physical disabilities.

One is serving a 25-year sentence on another murder.

Another is on drugs and has medical issues.

Then there’s a female that got the ball rolling.

She recalled how her brother was called “a well known drug dealer” in a Crime Stoppers segment after his shooting death.

“How the hell you know a drug dealer and you’re broke and living with your mama?” she asks. “It just doesn’t make any sense but because that is what they (police at the time) wanted to portray him as. I’m not saying he was perfect. He was not a perfect person, but that is what they put on Crime Stoppers.”

Arceneaux is asking anyone with information to come forward and help solve her brother’s killing.

“I believe no thing hidden will remain hidden,” she said.

Her next step is to ask the Texas Rangers branch of law enforcement to become involved.

A woman who reportedly used a cake knife in a threatening manner toward customers and police officers while inside an... read more