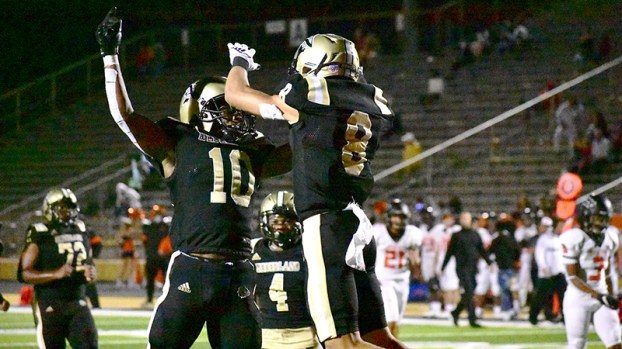 The Nederland passing game got the best of Texas City, as quarterback Rene Cunningham and receiver Kyndon Fuselier connected seven times for 198 yards and three touchdowns.

The Nederland defense also put up an impressive performance. On the opening drive, the Stings drove the ball more than 40 yards on 11 plays before making a 29-yard field goal to take an early 3-0 lead.

“You can’t simulate their running back at practice,” Nederland head coach Monte Barrow said. “It’s little things like angles and arm tackles. He didn’t go down easily. I think our guys learned from that first series and realized what they were in store for after that.” 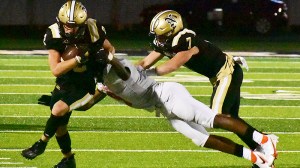 On their first drive, the Bulldogs were shut down on the Texas City goal line and forced to kick a 23-yard field goal to tie the game at 3-3.

The Bulldogs, who usually rely heavily on the run game, struggled against a stout Texas City front. Nederland ran the ball 35 times for 89 yards. 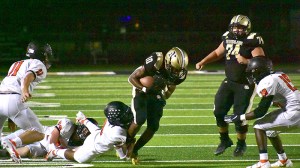 Facing a fourth and 2 from near midfield, Nederland ran a fake punt right up the middle for five yards. On the next play. Cunningham found Fuselier for a 40-yard touchdown to give the Bulldogs a 10-3 lead with 10:47 left in the second quarter.

With 2:22 left in the second quarter, Texas City fumbled the handoff on a fullback dive. Nederland recovered on its own 48. Seven plays later, on third and 20, Cunningham found Fuselier for a 27-yard double move that led to a touchdown to give the Bulldogs a 17-3 lead with 0:21 left in the half.

On the second play of the third quarter, Cunningham found Fuselier again for a 78-yard strike to drive up the score to 24-3.

Cunningham would add a 1-yard sneak for a touchdown on their next drive to give the Bulldogs a 31-3 lead.

Texas City’s only touchdown came after a high snap went over the Nederland punter’s head before going out of bounds at the Bulldog 14. Two plays later, running back Caleb Bell ran the ball in from 10 yards out.

“We preached all week about the physicality of this game,” Barrow said. “Just seeing them on video, they are a physical football team and the most physical team we have played to date. We came out and matched that and that was what we had to do to be successful tonight. We are really excited about the way our kids responded.”

Fuselier, who finished the game with 198 yards on seven catches and three touchdowns. He was Cunningham’s go-to target, constantly beating the defense for chunks of yards. Fuselier had catches for 23, 40, 14, 4, 12, 27 and 78 yards.

Nederland will host Dayton at Bulldog Stadium. The Stings will host Crosby at Stingaree Stadium. Both games will be played at 7:30 p.m. Friday.

PORT NECHES — After turning in one of their most dominant performances of the season in a 42-20 win over... read more