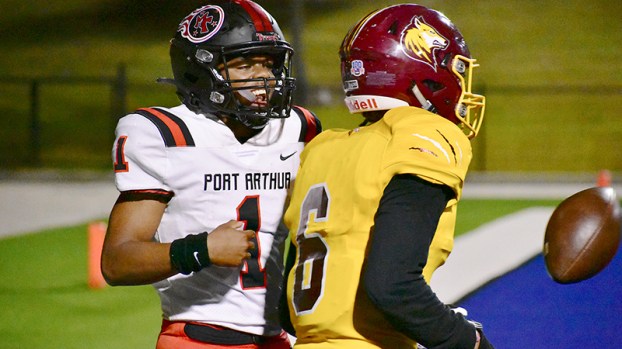 BEAUMONT — Once again, the Memorial defense proved its elite status as the Titans defeated the Beaumont United Timberwolves 20-0 at BISD Memorial Stadium Thursday night in Beaumont.

Coming into the game, both teams were at the top of the District 9-5A Division I standings and undefeated in district play.

The Titans (6-0, 4-0 in 9-5A-I) wasted no time, taking the opening drive 61 yards on 14 plays, which was capped off by an 11-yard pass from quarterback Jah’mar Sanders to running back Adrian Hayward.

The Timberwolves (3-2, 3-1) earned a first down on their first play before the Titans forced a punt down to the Memorial 1-yard line.

On the next play, Sanders found Branden Chaney on a 41-yard connection to get the Titans near midfield. A few plays later United defensive back Sir Zollocofer picked off Sanders following an under-thrown pass.

Memorial didn’t stay on defense for long after a premature snap hit a United receiver coming in motion. The Titans recovered the fumble and took over at the United 35. Two plays later, Sanders took a run right up the middle for an untouched 30-yard touchdown to bring the score to 13-0 with 1:28 left in the first quarter. Memorial missed the extra point. 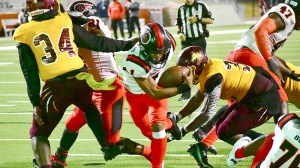 Memorial quarterback Jah’mar Sanders powers into the end zone for a second-quarter touchdown against Beaumont United on Thursday in Beaumont. (I.C. Murrell/The News) 11-5-20

After forcing a three-and-out with 8:24 left in the second quarter, pressure from the Titans special teams forced punter Chandler Rivers to punt the ball 1 yard. The Titans took over at their own 43. Sanders capped off a 10-play drive with a 1-yard touchdown on fourth-and-goal. The score gave the Titans a 20-0 lead with 5:01 left in the first half.

Both teams failed to get any substantial drives going in the second half, and Memorial appeared to prioritize milking the clock.

On its first drive of the second half, Memorial used up more than 8 minutes before Sanders threw an ill-advised pass that was picked off and returned to the United 45. The following Timberwolves drive petered out in the red zone before United turned the ball over on downs at the Titans 17 with 9:37 left in the game. Neither team would get close to scoring again. 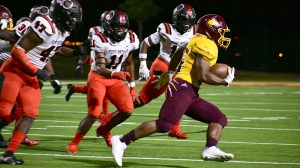 Tthe Memorial defense, which allowed 27 total yards and three first downs, one of which came on a 15-yard face mask penalty. The Titans held the Timberwolves to 125 yards of total offense (63 passing and 62 rushing) and seven first downs for the game.

“They play with great effort,” Memorial head coach Brian Morgan said. “Beaumont United is a good team and they can run. We talked all week about how No. 12 (quarterback Bradley Thomas) could run. When you have guys running to the ball, it limits those 50-yard plays to five-yard plays. They played hard and executed.”

Titans defensive end Jordan Thomas said the game sent a message to the rest of the district.

“Our mindset is way different,” he said “We aren’t worried about all of that talking and stuff. We are about executing… What I have to say to the rest of the district is the ‘trash’ Titans are on a roll.” 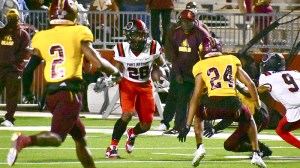 The Titans gained 365 yards of total offense. Sanders finished the game 14 of 31 for 144 yards and two interceptions. He added 93 rushing yards on 21 carries and three total touchdowns. Hayward finished the game with five carries for 26 yards but led the team with nine catches for 70 yards.

The Titans will host Baytown Lee at Port Arthur’s Memorial Stadium. United will travel to La Porte to take on the Bulldogs. Both games start at 7 p.m. Nov. 13.