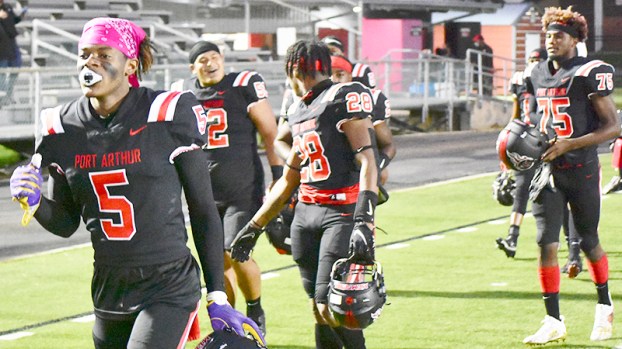 Maleek Jones, No. 5, of Port Arthur Memorial races down the sideline for the National Anthem before the Oct. 16 kickoff against Goose Creek Memorial. (I.C. Murrell/The News) 10-16-20

Memorial head football coach Brian Morgan said Maleek Jones has always had the ability to show up to any sport and be good.

Along with football, Jones plays basketball and competes in the high jump.

“He’s one of those guys that could show up in the middle of basketball season and still be one of the best athletes on the court,” Morgan said. “He can jump out of the gym. He goes out and doesn’t really practice for track and just goes out and can high jump. It was the same for football. We really watched him buy into the mental side of football this offseason.”

Morgan said Jones’ commitment has been the main reason the senior has been able to make more plays this year, like the 66-yard fumble return for a touchdown in the 26-3 win over La Porte on Oct. 8.

“He is a guy that has played a lot of football,” he said. “He is a guy that can play safety and corner for us. He really matured in the past 12 months. Everyone realized his ability at a young age but we saw him start to realize it last year.”

Jones said the fumble recovery was his first time to score on defense.

“(La Porte) ran a stretch to the right,” Jones said. “Jordon (Thomas) held him up and Darrell (Thornton) got the strip. I scooped and scored. I was happy.”

Morgan said Jones’ raw athleticism, coupled with his commitment, makes him a dangerous player on the Titans defense.

“He is starting to live up to his potential,” Morgan said. “You can see it in his school work and how he goes about his business every day. For some guys, that light switch doesn’t flip on until after their senior year. Sometimes, it comes early, but we are glad it switched on in time for him. Now, you are seeing a guy that is playing really well week in and week out and has a bright future ahead of him.”

At 6 feet, 2 inches tall, Jones is a lengthy corner, who tries to mirror his game after Los Angeles Rams defensive back Jalen Ramsey.

“I like everything about him,” Jones said of Ramsey. “I like his competitiveness, toughness and his mind.”

Jones said one area he differentiates from Ramsey is with the trash talking, for which Ramsey is notorious.

Morgan said Jones could be one of the team’s better receivers.

“He is super long,” Morgan said of Jones. “He has really good ball skills. If you just lined everyone up, he is probably one of the more talented receivers on the team. He can catch comfortably. He has really bought into what we need him to do on defense.”

Jones attributed the defense’s dominance this year to their bond, which is sometimes cultivated playing video games against one another. One might think the football team would gravitate more toward football video games, but Jones said the real competition comes with the NBA 2K series.

Jones said junior defensive lineman Alexander Prevost takes the top spot in the locker room when it comes to the game, but ranks himself a solid No. 2.

Jones plays with any team, but frequents the local favorite Houston Rockets.

Unlike the Rockets, Jones said he hopes his team’s regular season success lends itself to a few playoff victories, too.

The Memorial Titans are healthy and rested coming off a bye week as they prepare for a Thursday matchup against... read more