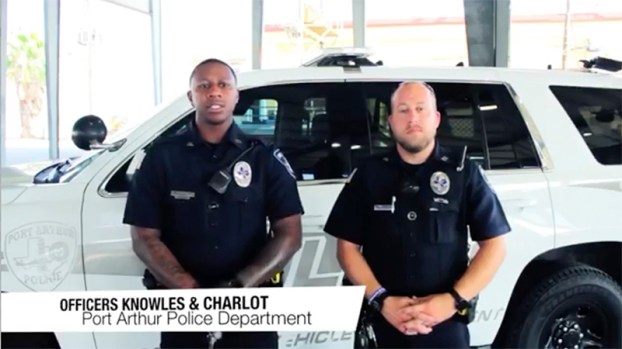 Port Arthur Police Officers James Knowles and Dairius Charlot appear in a video about what to do in a traffic stop. (Screenshot)

VIDEO: Port Arthur leaders react to police video of what to do, not do after being pulled over

Port Arthur Police Department’s recently released video on what to do and what not to do during a traffic stop is aimed at educating the public.

The city will have additional police presence enforcing traffic laws thanks to a Selective Traffic Enforcement Program grant, meaning a higher probability of motorists being stopped for traffic violations, according to information from PAPD.

In the video, a truck rolls through a stop sign and is pulled over by an officer. The narrator explains the motorist should safely move the vehicle to the right side of the road or to a safe, well-lit area and, if possible, keep hands visible at all times.

Stay in your vehicle and do not get out unless asked by the officer, the video instructs.

Have your driver’s license and insurance card handy. If they are not handy, do not rustle around in the vehicle, searching as the officer is approaching.

“Your intention may be to grab your information, it can be perceived as a threat by the approaching officer,” the video stated.

You may be asked to sign a citation. The video advises you do so.

“This is not an admission of guilt, it is simply stating you will appear in court. If you disagree with the reasons for your stop you will have the right to attend city court and explain to a judge why you disagree,” the officer said in the video. “Refusal to sign the citation can and will result in your arrest for the traffic violation.”

The video has garnered good reviews with city leaders.

Port Arthur Mayor Thurman Bartie said the video is helpful and teaches people what to do when pulled over by police.

And it’s important for African American males to know how to act when stopped by a police officer, Bartie said, adding the bluntness is necessary.

“If we are able to send messages to the community in how your behavior should be in these situations, there might be less police-citizen altercations and, God forbid, someone fatally wounded, being a citizen or officer,” Bartie said.

Bartie said the video is helpful not just for African American males but anyone, showing what your behavior and demeanor should be.

Bartie said the relationship between the police department and citizens is better under Chief Tim Duriso, although there are some who feel disenfranchised with how police investigate things.

“They are following the protocols they are trained to follow and most of the time the person, citizen or victim, they want quick and fast results and I can understand that,” Bartie said.

Overall, the police-community relationship has gotten better, he said, and he hopes it improves in more ways.

District 4 Councilmember Harold Doucet Sr. had not seen the video when contacted by Port Arthur Newsmedia but is pleased PAPD is reaching out to educate the public.

Doucet alluded to the civil unrest between police and the public that is seen in other parts of the U.S.

“I am glad the police department has taken the initiative to reach out to the citizens and give them some information that will help in the event of a stop,” Doucet said.

Doucet said the incidents he sees across the country may be due to a lack of understanding of the do’s and don’ts.

“I think the only way it will be resolved is if the citizens and law enforcement work together to make sure we handle the situation so that it won’t bring injury to either party,” Doucet said.

The key, he said, is educating the public.

A person’s response can either put the officer at ease or more on alert, he said.

NEDERLAND — Maci Simmons says the Nederland High School choir department is filled with some of the hardest working students she knows,... read more