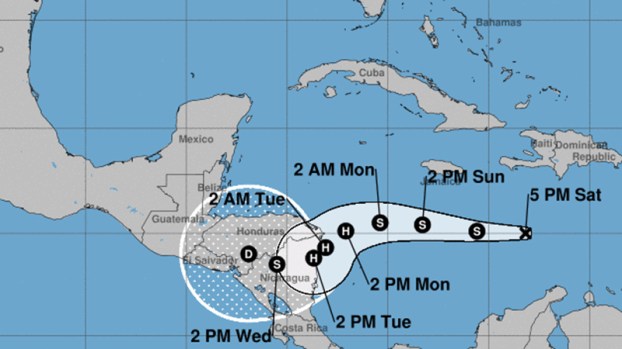 At 4 p.m. Saturday, the center of the depression was located over the central Caribbean Sea about 315 miles southeast of Kingston, Jamaica, and about 665 miles east of Cabo Gradias A Dios on the Nicaragua/Honduras border.

The depression is moving toward the west near 15 mph, and this westward motion is expected to continue through Sunday night.

A slower motion toward the west-southwest and then southwest is forecast on Monday and Tuesday. On the forecast track, the center of the cyclone is expected to be near the northeastern coast of Nicaragua by Monday night.

Maximum sustained winds are near 35 mph with higher gusts.

Strengthening is forecast to take place, and the depression is expected to become a tropical storm tonight. When that occurs, it will be named “Eta”.

The system is then expected to become a hurricane by Monday.

The system is expected to produce 5 to 10 inches of rain, with local 15-inch amounts, across Jamaica, the Cayman Islands, and possibly the southern coast of Hispaniola.

Evadale raced to a 29-0 halftime lead, and the host Rebels cruised to their first District 12-2A Division II victory,... read more