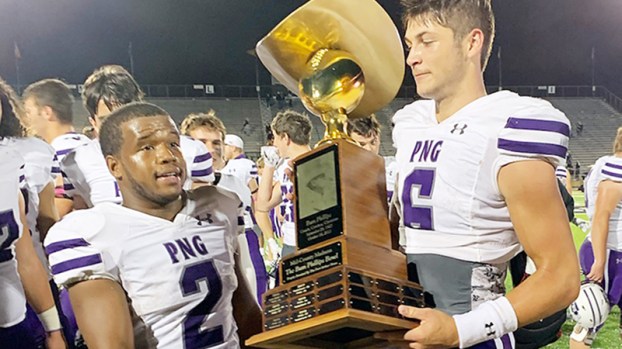 Whether calling it The Bum Phillips Bowl, Mid-County Madness or simply Friday night football between Port Neches-Groves and Nederland, there is nothing ordinary about this game.

As a New Orleans native, I was unfamiliar with the rivalry’s intensity before moving to Southeast Texas in June of 2019. Two games and 16 months later has provided quite an education for this sports fan.

My view of the PNG and Nederland game Oct. 23 was extra special as I was able to sit at field level beyond the west endzone.

My presence was inconsequential other than the fact that I was acting as temporary caretaker for the Bum Phillips Bowl trophy, presented annually to the winner.

In Phillips’ honor, The Port Arthur News, led by West, introduced the Bum Phillips Bowl trophy a few years back. Awarded to the winner of Mid-County Madness, the unique trophy features a football with Phillips’ signature cowboy hat on top.

Today, many of the teenagers playing for either the Bulldogs or Indians may not know the details of the trophy’s history, but the passion for which they play for it is evident.

The coolest part of this year’s game was experiencing it with my 12-year-old son, a seventh grade football player who harbors dreams of future Friday Night Lights competition.

He was in awe of the talent displayed by the varsity football players and completely taken back by the pageantry showcased by each band member, cheerleader and every other student and parent who contributed to the on-field spectacle and gameday atmosphere.

Knowing the COVID-19 pandemic severely cut down this year’s attendance only made his imagination run wild as he pictured the event at full participation.

When the game was over, I had the pleasure of carrying the trophy to winning coach Brandon Faircloth, who wanted to formally accept it near the student section and band.

It was a joyous scene, and the reactions of players Lance Vaughn, Blake Bost and Dede Conner when each got their chance near the trophy are memories I won’t soon forget.

Unfortunately, the trophy couldn’t be left with the team that night. I had to take it back so the game year and final score could be added to its base before a formal return back to Port Neches-Groves for the rest of the 2020-21 academic year.

As you can imagine, the trophy was a little worse for wear after passing from enthusiastic player to coach to player.

The experts at Jiffy Trophies have since fixed it up and released it back into our care. It will be brought to Port Neches-Groves High next week, where it will stay…until next year’s installment of Mid-County Madness.

Gift of Life, Philpott host “Get in the Pink” for breast cancer survivors

NEDERLAND — The Julie Rogers Gift of Life Program modified its annual “Get in the Pink” luncheon that raises awareness... read more