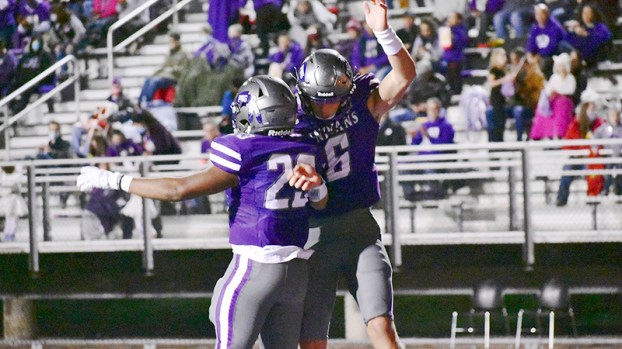 6 touchdowns for No. 6: Bost has hand in each score to lead Indians past Broncos

PORT NECHES — Blake Bost threw for four touchdowns and ran for two more as the Port-Neches Groves Indians remained unbeaten in District 12-5A-Division II with an impressive 42-20 win over the Dayton Broncos to the delight of the partisan Homecoming Night crowd at The Reservation on Friday night.

PNG never trailed as the Indians improved to 3-2 overall and 2-0 in the division.

The Indians scored on all four of their first-half possessions as the Broncos (0-5, 0-2) had no answer for Bost and Co. PNG had 243 yards over the first two quarters and scored quickly all four times, with the longest drive lasting just 3:02. 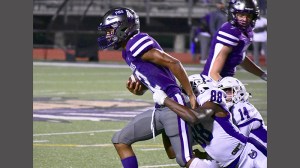 Dejaunte “Dede” Conner of PNG breaks away from James Harris (88) and Zack Huntley (14) of Dayton for a long run near the end of the first quarter Friday in Port Neches. (I.C. Murrell/The News) 10-30-20

“We got off to a fast start, and that was important tonight,” PNG coach Brandon Faircloth said. “After playing four close games to start the season, it was good to play with a lead.”

The Indians got things started early, needing just two plays and 51 seconds to go 18 yards after PNG’s Christian Sullivan picked off Dayton quarterback Blayne Denton. Bost hit Brady Nail with a 17-yard pass for the score. Tate Sandell added the first of six PATs, as the Indians led 7-0 with 9:51 remaining in the opening quarter.

Dayton held the ball for 7:41 on the ensuing possession, but the PNG defense rose to the occasion with a goal-line stand, throwing the Broncos for a 3-yard loss on fourth-and-goal from the 1.

The Indians then drove 96 yards in 2:34, capping the drive on a 3-yard TD run by Bost. The big play of the drive was a 63-yard pass from Bost to Dejaunte Conner.

“Our defense was tremendous,” Faircloth said. “Getting that early interception got us off to a great start, and stopping them on the 1-yard line was huge. That really changed the momentum.”

The PNG defense came up with a goal-line stand on the 1-yard line late in the first quarter when the score was still 7-0. The Indians then drove 96 yards on the ensuing possession to take a 14-0 lead.

Dayton, which had 238 yards of offense in the first two quarters, cut the PNG lead to 14-6 with 7:18 remaining in the first quarter when Denton connected with Ashton Garner for an 8-yard scoring pass. The Indians answered that TD with two more of their own as Bost hit Ryan Sosa with a 21-yard scoring pass before connecting with Lance Vaughn on a 9-yard scoring aerial.

PNG increased its lead to 42-7 in the third quarter as Bost threw a 21-yard TD pass to Grant Pearson before scoring on a 6-yard run. Dayton made the score respectable with a pair of fourth-quarter touchdowns, but the outcome was never in doubt.

“We held them to six points for most of the game,” Faircloth said. “That is a well-coached team with some big offensive weapons. I was very proud of the way we played in all aspects of the game.” 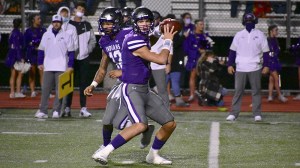 Bost, who threw for 274 yards and ran for 35 more. He also had a press breakup in the end zone on defense.

Lance Vaughn had 141 yards on 15 carries for PNG. Vaughn was especially strong in the second half, rushing 10 times for 108 yards.

Evadale raced to a 29-0 halftime lead, and the host Rebels cruised to their first District 12-2A Division II victory,... read more