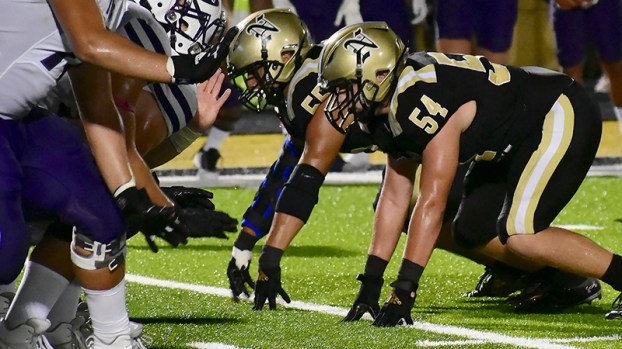 NEDERLAND — The Nederland Bulldogs personify old-school football in many ways.

They tend to lean on the rushing attack, fly around on defense — and have a defensive lineman sporting a mullet, which he curled for Friday’s game against Port Neches-Groves.

When junior defensive lineman Jacob Kotz isn’t chasing down opposing quarterbacks, he can be found hunting deer and ducks.

While Kotz said the largest deer he has nabbed was an Axis buck, he said the kill he is most proud of is an aoudad. 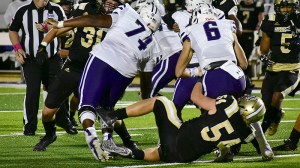 “I go duck season and deer season and fish when it’s time to fish,” he said.

Nederland head coach Monte Barrow said the junior always has a story about something he has hunted the previous weekend.

As for his illustrious locks, Kotz began growing the mullet during the previous baseball season.

“I just kept growing it out. My teammates talk about it all the time,” he said laughing.

Barrow said he applauds Kotz’s confidence to attempt to pull off the look.

“He’s an old-school kid,” he said. “He walks around with a mullet and there are not too many kids in this school brave enough to walk around with one. He is going to have a smile on his face with that mullet and be proud of it.”

The head coach said Kotz may be undersized to play on the line but added his small stature is no match for his competitive edge.

“If someone just looked at him, they wouldn’t guess he plays defensive line based on his stature,” he said. “He does everything the right way. He is very technical. He is a Nederland kid and his dad is a Nederland guy. You know what you are getting in him. If a coach tells him to play something a certain way, he is going to do it that way. At the same time, you have to be careful what you tell him, because he is going to do exactly what you tell him.”

“At this point, we are very proud of how he has progressed at that spot,” he said. “He also provides depth on the offensive line. He is not a big kid, but he gets the job done no matter where you put him. He’s athletic and can snap the ball, but Coach [Jody] Walker said it was going to be hard to keep him off the field early on and he was right.”

“We mix him up on the line,” Barrow said. “The fact that he can play both of those spots at the size that he is, that goes along with many of those that have come here before him. It’s not the size of the dog in the fight, and he proves that every day.”