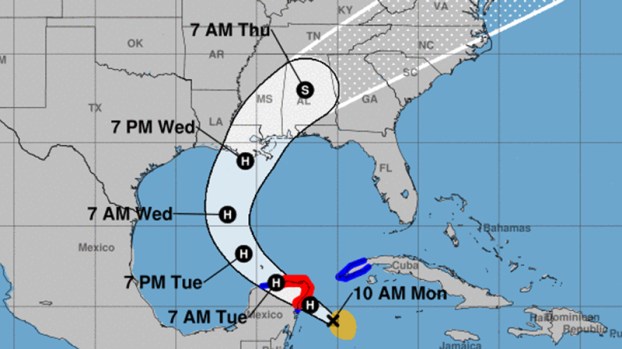 10 a.m. MONDAY UPDATE: Zeta expected to threaten as hurricane when it hits coast

At 10 a.m., the center of Tropical Storm Zeta was located over the northwestern Caribbean Sea about 140 miles southeast of Cozumel, Mexico.

Zeta is moving toward the northwest near 10 mph.

The center of Zeta will move near or over the northern Yucatan Peninsula later Monday afternoon or Monday night, move over the southern Gulf of Mexico on Tuesday and approach the northern Gulf Coast on Wednesday.

Maximum sustained winds are near 70 mph with higher gusts.

Tropical-storm-force winds extend outward up to 115 miles from the center.

Strengthening is forecast to take place, and Zeta is expected to become a hurricane later Monday. Some weakening is likely while Zeta moves over the Yucatan Peninsula Monday night and early Tuesday, and then strengthen again while it moves over the southern Gulf of Mexico later on Tuesday

Rainfall totals of 4 to 8 inches, with local amounts of 12 inches, are possible through Tuesday along and east-northeast of Zeta’s track across the Yucatan Peninsula of Mexico, the Cayman Islands, and central to western Cuba.

Zeta is forecast to be at or near hurricane strength when it approaches the northern Gulf Coast on Wednesday, and there is an increasing risk of dangerous storm surge, wind, and rainfall impacts from Louisiana to the Florida Panhandle.

Residents in these areas should monitor the progress of Zeta, as Hurricane and Storm Surge watches will likely be issued later today.

At 8 a.m. Eastern (7 a.m. Monday local time), the center of Tropical Storm Zeta was located over the northwestern... read more