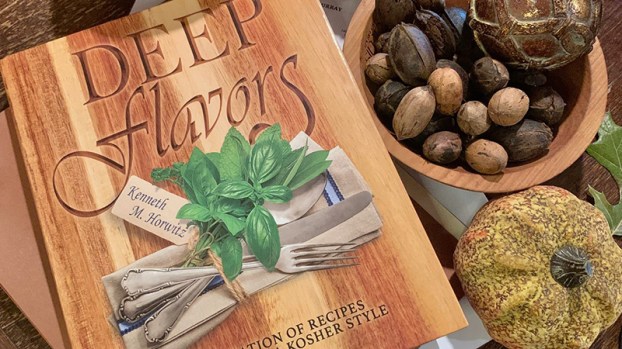 Perhaps you like your pecans solo, as in right-from-the-shell, just-picked from a Groves back yards.

Kenneth M. Horowitz shares how to toast them up a notch in “Deep Flavors.”

This lawyer and CPA writes lovingly on foods from pickled jalapeno peppers to mushroom soup with roux.

Let’s focus on his pecan love, which in this book includes: Baklava, Pecan Pie, Pumpkin Pecan Cheesecake and Sweet Potato Souffle or Pudding.

The book is subtitled “A Celebration of Recipes For Foodies in a Kosher Style.”

The following cake has ties to a 1950s letter to the Dallas Morning News, and President Johnson reportedly served it to the chancellor of Germany at his ranch on the Pedernales River.

See if you think we’d enjoy it in Southeast Texas.

Preheat the oven to 350 degrees.

Butter and line the bottoms of three 9-inch cake pans with parchment or wax paper; butter the sides of the pans and the paper.

Break up the chocolate. Melt the chocolate in the filtered water either in a double boiler or by microwaving the chocolate and water in a large, covered microwavable bowl on high for 45 seconds, then stirring, or until chocolate is almost melted.

You have to stir because the chocolate may not look melted, even though it is. Stir until melted. If you are using the microwave, restart for another 30 seconds, and stir again as necessary, being careful to not burn the chocolate.

Whisk the flour, baking soda and salt in a bowl. Set aside. Then beat the butter and sugar in a large bowl with the with the beater attachment, not the whisk, in an electric mixer such as a KitchenAid.

Use the medium speed until light and fluffy – a couple of minutes. Add the egg yolks, 1 at a time, beating well until combined after each addition. Stir in the melted chocolate and vanilla.

Add the flour mixture slowly, alternating with buttermilk and beating until well blended after each addition. Beat egg whites in another large bowl with the electric mixer on high speed until stiff peaks form.

Gently stir into the batter. Pour evenly into the prepared pans. (This is a perfect time to use a kitchen scale.)

Bake at 350 degrees for 30 minutes or until a tooth pick inserted into the centers comes out clean. Immediately run a knife or spatula between each cake and the sides of each pan. Cool for 15 minutes.

Remove the cake layers from the pans by placing on a flat board or a plate over the cake pan and quickly inverting. The cakes should slip out of the pans.

Remove the paper from the now exposed bottoms of the cakes. Cool completely on wire racks. Spread coconut-pecan filling and frosting between the layers and on top of the cake.

This cake can be frozen when finished or before filling and frosting. In fact, you can make the cakes weeks ahead and freeze them for later use. Simply make the frosting the day you will be serving the cake, take the cakes out of the freezer, frost them, and let the now completed cake come to room temperature.

Mix the milk, sugar, butter and egg yolk sin a large saucepan. Cook on medium heat, stirring constantly, for about 12 minutes or until just thickening and turning golden. Remove from heat.

While cooking longer does not ruin the frosting, it makes it much harder to spread, and the cooled result can be firmer, resulting in a less luxuriant cake-and-frosting combination.

Add the coconut, pecans and vanilla, and mix well. Cool to room temperature, checking to make sure it is of a desired spreading consistency.

The sides to not need to be frosted, but if you desire to do so, double the frosting recipe, although the result would be very sweet.

To Groves Chamber of Commerce Executive Manager Ronnie Boneau, it’s a weird feeling to not have the Groves Pecan Festival... read more