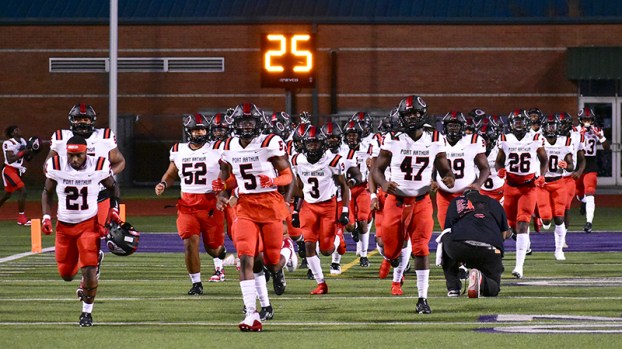 GALVESTON — Heavily favored Port Arthur Memorial was put on the ropes by a young Galveston Ball squad on Friday night before the Titans’ experience gave them the push they needed to avoid an upset.

Tyrence Augusta’s 61-yard touchdown run on the first play of the fourth quarter gave Memorial the lead for good in a 35-21 win over Ball at Courville Stadium, dropping the Tors to 1-3 overall and 0-2 in District 9-5A-1.

The Tors got bigger things from quarterback Kristian Dalton, who nearly ran Ball High into a huge win. Making the start in place of injured Seth Williams, Dalton rushed for 237 yards and three touchdowns on 18 carries that included scoring jaunts of 75 and 64 yards.

Ball had an opportunity to tie the game later in the fourth quarter, but Dalton was stopped a yard short on a fourth-and-2 at the Memorial 40. The Titans marched down field and clinched the victory when defensive lineman Jordon Thomas — who lined up in the backfield as an extra blocker — recovered a Jah’mar Sanders fumble in the end zone to close out the scoring with 5:40 left.

Memorial opened the scoring when Sanders connected with Ilijah Williams on a 19-yard pass to give the Titans a 6-0 lead with 7:04 left in the first quarter. The Tors responded on Dalton’s 10-yard run to cap off a scoring drive that gave them a 7-6 lead after the first quarter.

Sanders put the Titans ahead 13-7 with an 11-yard scoring run with 1:28 before intermission, but after Ball stopped Memorial after the Titans recovered the ensuing kickoff, Dalton cut toward the sideline, shedded two defenders and then ran 75 yards on the last play of the first half to give the Tors a 14-13 lead.

Dalton’s running extended the lead as he ran 64 yards to the end zone on Ball’s first play of the second half to make a 21-13 game at the 10:25 mark, but Sanders took matters into his own hands with a 56-yard run that tied the game at 21-all following a conversion run from Branden Chaney with 3:40 in the third.

Ball High will travel to Friendswood for its next game 7:30 p.m. Friday.

NEDERLAND — With all of the pomp and circumstance surrounding the historic Mid-County Madness rivalry, the Nederland Bulldogs are leaning... read more