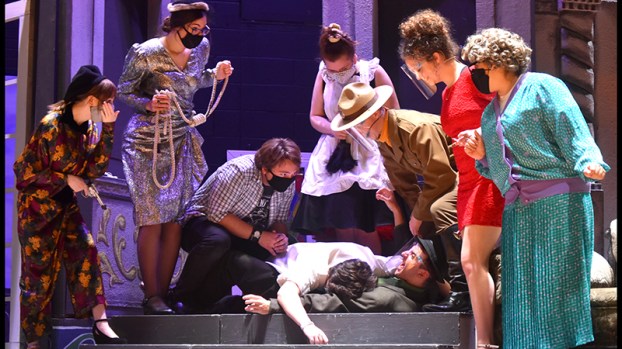 PORT NECHES — The names, weapons and rooms are as familiar as the board game that was made into a movie.

And now Clue, the high school edition, will play out on stage at Port Neches-Groves High School, beginning Sunday and running Monday, Tuesday and Thursday.

Not much has changed from the movie version — it’s still a murder mystery, a thriller and a comedy all rolled into one.

But instead of different locations, all of the rooms of the mansion are represented on stage at once, theater director Melissa Eyles said.

“It’s the same characters as the movie,” Eyles said, adding in this version professor Plum is female. The idea came from looking at different versions of the board game in which some instances Plum was male, and others a female. “They have the rooms all on stage; the conservatory, billiards room, lounge, study.” 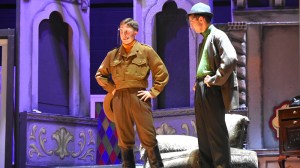 “So studious she becomes narcissistic; probably thinks she’s better than everyone else because she’s smarter,” senior Doiron said.

Col. Mustard, portrayed by Carter Collins, is the jokester of the group and though authoritative is scared on the inside.

And let’s not forget Yvette, the maid played by Maura Gibson, D.J. Ganger as the cook and the sadistic, narcissistic, short-tempered Wadsworth portrayed by Jake Rhodes. 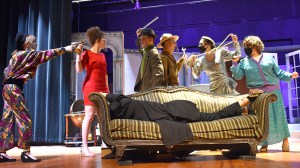 The cast hasn’t had much time to work together on this production.

“The hurricane slowed us down. We have only been practicing together for about three weeks,” Eyles said from a seat in the audience as the cast practices on stage. “We’re very fortunate none of the kids had to miss rehearsal for any reasons except for sharing them with band and sports.”

The group has also maintained all COVID-19 restrictions in school and out. This group, she said, studies together and stays with the same circle.

During practice earlier this week cast members were either masked up or wore face shields.

They will be mask/shield free during the shows.

The theater will be at 50 percent capacity, will be skipping rows and masks are required.

The air conditioning will be blowing but cast members will be equipped with sound reinforcement.

“We’ve worked so hard with hurricanes and COVID and are extremely proud,” she said.

Tickets are $5 for students and seniors and $10 for adults. The theater does accept the PNG purple card for senior citizens in the district.