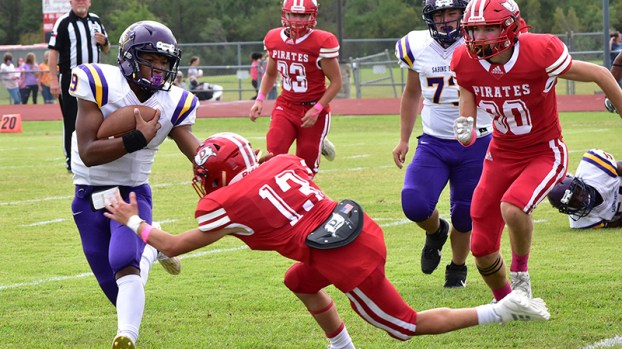 Even though the Sabine Pass Sharks are in search of their first win of the season, they have plenty of reasons to be highly motivated for Friday’s game against the High Island Cardinals, Sharks head coach Jason Thibodeaux said.

The game is set to kickoff at 7 p.m. at Shark Stadium.

“It’s our second district preseason game,” Thibodeaux said. “We are still trying to work out the kinks and simulate game speed. That is hard with the number of kids we have. Even if we do half line, they don’t get to see the full picture of having all 11 on the field. They had kids that can come in and sub to give kids breaks. It makes it tough.” 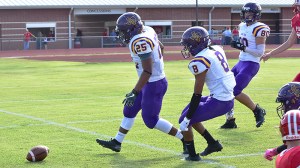 Grayson Johnson (25), Alexander Saucedo (8) and Riley Pinell (80) chase down a Deweyville fumble that rolled out of bounds during an Oct. 17 game. (I.C. Murrell/The News)

Thibodeaux said his team has plenty of motivation heading into the contest against the Cardinals (0-5, 0-2).

“This week is High Island, which is our district foe,” he said. “These kids don’t really know the history, but they are about to find out. The last time we played against High Island, we beat them 35-0. That is a little carrot I dangled in front of them. Hopefully, that is a little motivation to keep these guys engaged.”

Sabine Pass has to win two of three of the remaining games on the schedule to make the playoffs.

“Playoffs is a goal we had at the beginning of the season,” he said. “The first was to have a season. The second was to be successful, win two games and make it. It’s there for the taking. We just have to get over the lining up, the false starts and get a little more conditioning on them so they can go four quarters without running out of gas.”

Thibodeaux said the Cardinals have a few more players than his Sharks but added his team matches up well.

“We watched film on them,” he said. “I think we are real competitive against them. If we can get the kinks out, we will be fine. We have to be fresh from the first quarter on. The 11 we have, that we put on the field is pretty good. We just run out of gas because it is the nature of the beast.”

The coach said he believes his team can overcome the distractions that homecoming week can present.