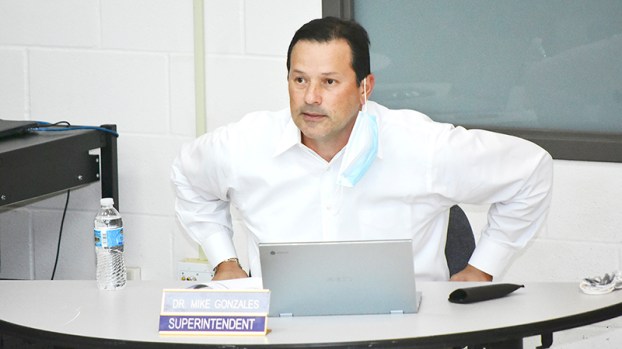 PNGISD board extends Superintendent Gonzales’ contract; District recognized as one of state’s best

Gonzales, who was on a rolling three-year contract, will be paid $176,500 annually.

“What I like about Dr. Gonzales is his leadership,” PNGISD board President Dr. Scott Bartlett said. “He takes control of our district. He puts the right administrators in the right positions through all of this, so he has a solid team behind them. But Mike is very diligent in making strong decisions for the district and leading by example.”

Gonzales announced the rankings during the open session of this week’s board meeting at Port Neches-Groves High School. His evaluation took place in closed session immediately afterward.

“Our administrative staff does a great job working with the teachers on a daily basis,” he said.

“Superintendent jobs are not given. They’re earned, just like a head coach’s job isn’t given. It’s earned,” Gonzales said. “… We should interview for every position that comes up. If we want to pick the very best people, that’s the route to take, for sure.”

The 25-year education veteran has also worked in the Port Arthur and Beaumont ISDs.

Gonzales openly read a letter to Texas Education Agency Commissioner Mike Morath asking for a waiver to STAAR (State of Texas Assessments of Academic Readiness) testing for this school year, given the challenges PNGISD had to face in the way of the recent hurricanes, the November 2019 TPC Group explosions and the coronavirus crisis. The reading drew a small applause from meeting attendees.

“I sent them the letter because I wanted to make sure they understood the concerns of our community,” Gonzales said. “We have community members who are concerned about the loss of instructional time and how that could impact our students during the STAAR test. It’s not just the entire community. Our teaching staff is concerned about that. Our administration was concerned about that. We’ve been so busy just trying to get through COVID that we hadn’t had much time to focus, but we have heard some chatter on it, and although we’ve been busy working through this pandemic, I’ve also heard their concerns.”

Gonzales expects construction of intermediate school campuses (grades 3 through 5) to begin in spring 2021, with primary schools (kindergarten through grade 2) to follow as early as September. Port Neches and Groves each will have a new intermediate campus and primary campus.

“Normally, they take about two years to complete,” Gonzales said.