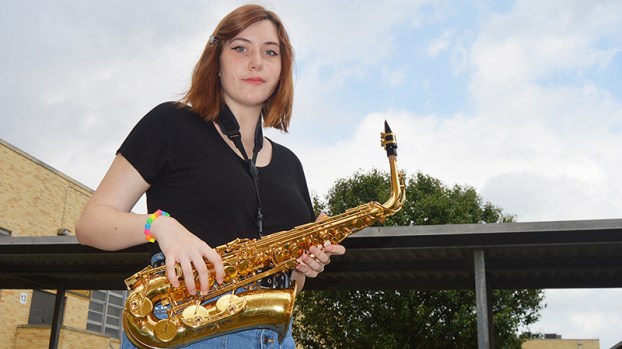 NEDERLAND — Addilyn “Addi” Currie remembers first picking up and blowing into a saxophone.

Of course the sound wasn’t very good. She had never played one before; yet, she felt there was a lot of potential.

“I just had a feeling, so that is what I went with,” she recalls. “I don’t really regret my decision.”

The 13-year-old is a young veteran with the instrument and an accomplished musician at Central Middle School in Nederland.

She plays lead alto in the school’s jazz band, where school leaders say she demonstrates a strong aptitude.

“She just really blossomed and grew as a musician,” jazz band director Jonathan Blake said. “She grew into that role as a lead alto player. She exceeded my expectations. She exceeded everyone’s expectations. She was able to see the band grow from last year, when we recorded, and all the great things she did as a seventh grader to now as an eighth grader.” 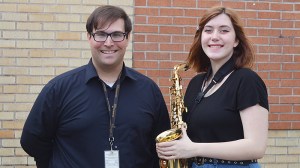 The honor sets the band up for a feature performance as part of the Texas Music Educators Association convention in February.

Blake said, traditionally, the lead alto saxophone sets the musical style and phrasing for the rest of the jazz band. The lead plays some of the most exposed and difficult parts of the pieces.

“The lead alto frequently has the melody or main musical idea of the piece that we are playing, so the person in this chair leads not only the saxophone section, but the rest of the sections,” Blake said. “Addi possesses a drive and determination for whatever she is involved in. She is very interested in music and the arts, so she devotes her time to honing her abilities. She is able to pick things up very quickly.”

Addi is known to read beyond the notes on the page and portray emotion, phrasing and style into her playing in a very natural way.

Blake said this is atypical in younger players; however, music does run in Addi’s family.

Her dad is a percussionist who has played gigs and in bands his whole life.

She’s grown up in an environment where music and creativity are encouraged, and Addi said it was a given she would be in band and playing an instrument in school.

She credits Blake and Central Middle Head Band Director Eric Rose for teaching in a way that gets fifth graders interested.

“Band is a very good extracurricular activity for being social, making new friends and learning teamwork in general,” she said.

“I derive a lot of inspiration from other jazz artists. I’ve also seen a lot of saxophonists play live out at venues. Really what I strive for is to end up as good as my role models.”

Addi knows she wants to join the high school jazz band and, eventually, earn a college scholarship for band.

“I do plan on playing saxophone in college and hopefully making that a permanent part of my school career,” she said. “I would definitely like to play in a symphony or in a jazz band once I graduate college and well into adulthood. I really want to constantly expand my horizons and introduce myself to new art forms and different people that also enjoy music. My main goal is to keep learning when it comes to music and everything about it.”

“I really did have confidence in getting the award that we got,” she said. “It was thrilling to actually hear the news.

“I’ve surprised myself and have been surprised by the energy of the others in the jazz band. Whenever I was in sixth grade just learning how to play saxophone, I never would have thought this sort of accomplishment would have been possible. This is something worth being proud of when it comes to development and growth.”

PAPD looking for a few good men, women. See how you can join force.

An entry-level civil service examination for the position of Port Arthur Police officer is set for 9 a.m. Nov. 7... read more