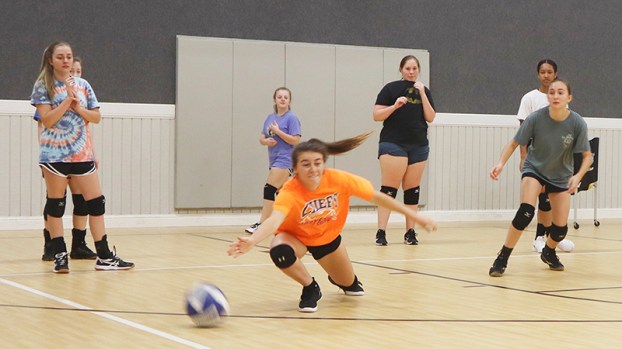 The Lady Lions practice at Ridgewood Church Thursday in preparation for their tournament in San Antonio. (Chris Moore/ The News)

Head coach Hannah Jones took over the program two years ago and her sister Holly Jones joined the staff this year. Both sisters are Port Neches-Groves alumna and former volleyball players.

“My senior year, I decided that I wanted to coach,” Hannah Jones said. “I was sitting at Casa Olé one day and one of the girls came up to me and asked if I wanted to coach a home school volleyball team. I told them I would, but didn’t know that it would be me running a program. Coming in and having to run my own program has been pretty cool.” 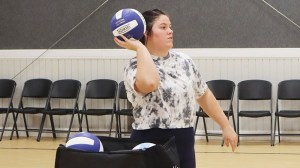 The Lady Lions are a Port Arthur-based homeschool program and part of TCAL District 6-2A.

Jones said she and her sister use the drills they learned from their time at PNG as well as help from Nederland volleyball coach Allie Crommett.

The Lady Lions will compete in San Antonio this year for the state title. The current pandemic has greatly reduced the field of competition, Jones said.

“There was supposed to be 20-something teams going but because of COVID, there is only four of us going this year. That means we have a really high chance of going in there and actually winning the whole thing.”

“It’s really exciting,” Gray said of her second year in the state tournament. “It’s a blessing. I want us to win. Hannah has been such a good coach. We’ve learned a lot of stuff from here. She always teaches us new defenses.” 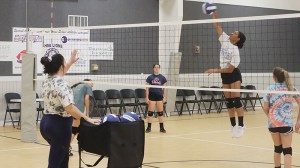 Henson said the team is tightknit, aided by bonding exercises, such as sleepovers.

Gray said the mesh and chemistry between the upperclassmen and underclassmen have helped the team succeed.

“I think one of the reasons we have enjoyed having the freshmen is that we got to know them last year by being on the team,” she said. “We had a big sister, little sister thing going. We wrote notes to them and got to know them on a more personal level. It helped build the bond.”

Henson said Jones has rebuilt the program in a positive way that has a rippling affect on the players.

“Hannah has transformed the way we run things, and we are willing to work,” Henson said.

The Jones sisters and the Lady Lions will take the court in San Antonio at the George Gervin Academy at 10 a.m. Thursday (Oct. 22).