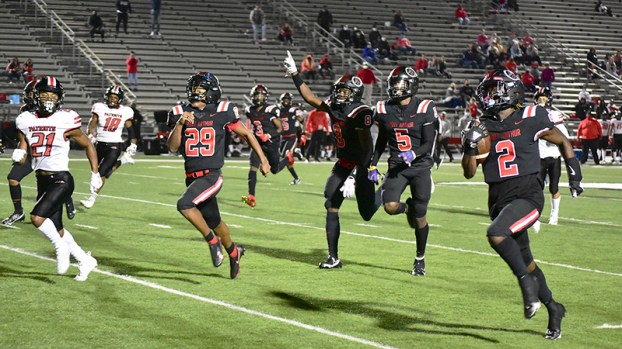 Tyrence Augusta (2) of Port Arthur Memorial takes a kickoff back for a touchdown with teammates Rayvin Fontnette (29), Tony Brooks (8) and Maleek Jones (5) giving him a wall against Goose Creek Memorial’s Jesiah Haye (21) on Friday in Port Arthur. (I.C. Murrell/The News) 10-16-20

The Port Arthur Memorial Titans defense came up big again in a 20-13 win over the Goose Creek Memorial Patriots at Memorial Stadium on Friday.

With under 2 minutes left in the game, GCM was tasked with going 93 yards, down seven points. On a fourth-and-7, PA Memorial sophomore Darrell Thornton sliced through the offensive line to sack the quarterback, effectively ending the game.

After forcing Goose Creek (2-2, 1-1 in District 9-5A) to a three-and-out on their opening drive, the Titians (4-0, 2-0) wasted no time. Quarterback Jah’mar Sanders found Tony Brooks for a 69-yard connection down to the 1-yard line. Sanders ran the ball in on the next play to give the Titans a 7-0 lead just over 2 minutes into the game.

With 7:27 left in the first quarter, the Titans forced another punt, but an unfortunate bounce hit a Port Arthur player on the leg and GCM recovered on the PA Memorial 39. On the next play, Patriots quarterback Dylan Pitre broke free for a 39-yard touchdown run. GCM missed the extra point and the Titans remained on top 7-6. 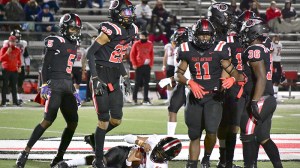 Devuan Davenport (22) of Port Arthur Memorial is pepped up after a key stop of Goose Creek Memorial quarterback Dylan Pitre in the first quarter Friday in Port Arthur. Along with Davenport are Maleek Jones (5), Jayden Fisher (11) and Tyrese Wallace (36). (I.C. Murrell/The News) 10-16-20

On the ensuing kickoff, Titans receiver Tyrence Augusta returned the kickoff 90 yards to bring the score to 13-6 with 5:30 left in the first quarter. PA Memorial also missed the extra point.

Neither team scored in the second quarter.

“We didn’t play well on the offensive end,” Titans coach Brian Morgan said. “The defense stepped up again. The kickoff return was huge. We knew they were going to force us to throw the ball and we just missed some. [Sanders] was just a little off tonight. Even though we didn’t finish off those drives, we were able to eat clock and we didn’t have any turnovers.”

Things got chippy as the clock expired for halftime. Sanders ran the ball about 10 yards and was heading toward the Goose Creek sideline before being hit late out of bounds. A few Titans players went in to get him. After sorting the flags, the referees called offsetting penalties and went into halftime. 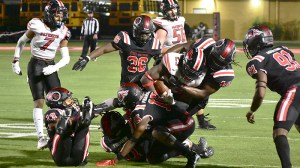 In the third quarter. GCM was driving the ball deep into Titans territory, but both of PA Memorial’s University of Texas commits teamed up on back-to-back plays to secure the Titans’ lead.

Senior Jordon Thomas sacked Pitre, and then junior Jaylon Guilbeau intercepted a pass off a deflection.

The entire Titans defense. With the exception of a few run plays by the Patriots, the Titans defense held strong, holding GCM to 240 yards of total offense and forcing two turnovers. The Titans recovered a fumble from a botched handoff right before the end of the first quarter.

Thomas ended the game with two sacks. Sanders went 12-of-20 for 182 yards to go along with 59 rushing yards on 18 carries. Titan running back Adrian Hayward finished the game with 137 total offensive yards.

“I had to get the offensive linemen right,” Sanders said. “There were certain plays were the d-line would do certain things and then do something different. I had to get the guys together on the sideline and point it out. They did well in the second half though.”

Under pressure: Quarterbacks have to worry about more than one Thomas