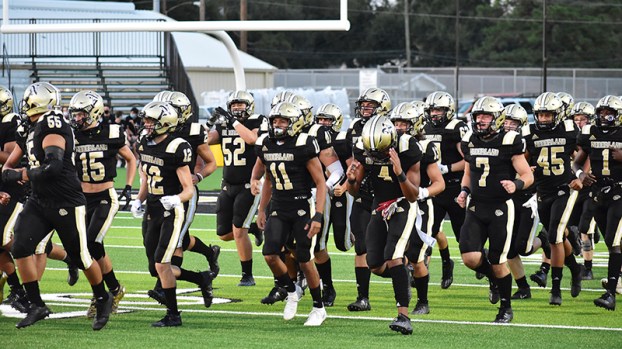 NEDERLAND — The Bulldogs will have a week to celebrate their dominating 42-20 win over Jacksonville from last Saturday, but don’t expect Nederland to celebrate for long.

Even though there is no opponent scheduled Friday, the Bulldogs (1-1) already have their sights set on the biggest rivalry in Southeast Texas — Mid-County Madness (The Bum Phillips Bowl).

Even after dominating Jacksonville, head coach Monte Barrow told his team there were plenty of errors to cleanup before playing against Port Neches-Groves (1-2).

“We have a couple of days to introduce the opponent for the next week,” Barrow said with a hint of intentional ambiguity. “At the same time, we have to fix what we need to fix, regardless of who the opponent is. We will then look to put that to use in a format against our opponent.”

By Tuesday, most of Nederland’s varsity players had electricity in their homes, by a show of hands. Barrow said a few assistant coaches were still without power at the time.

“Like I’ve told them, we’ve been through so much now that there is no excuse,” Barrow said. “We’ve had hurricanes, pandemics, power outages and floods. These kids have seen more than they needed to see, but it has made them tougher.”

Senior outside linebacker Kade Scott has been injured during the last two matchups between the Bulldogs and PNG Indians. This year, fully healthy, Scott said he is ready for his first shot at PNG.

While Barrow talked to his team, he preached cleaning up the little mistakes that could’ve turned a 42-20 victory into a 42-0 shutout.

The contest will be the first District 12-5A Division II game for either team.

The Port Arthur Independent School District announced Wednesday morning that power has been restored to all of its buildings. “Therefore,... read more