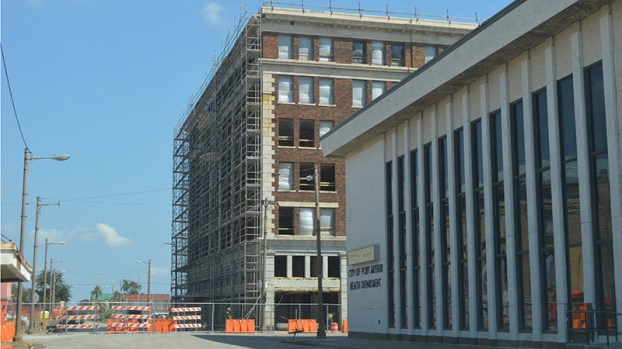 The city council on Tuesday approved an 18-month lease of the two-story building at 449 Austin Avenue.

Motiva Enterprises is acquiring a fourth building for its ongoing downtown development, and the city of Port Arthur has authorized a lease agreement with a company subsidiary to facilitate the move of the city’s health department.

The city council on Tuesday approved an 18-month lease of the two-story building at 449 Austin Avenue, which has been occupied by the Port Arthur Health Department since 2002, to Aurora Capital Holdings, a Motiva subsidiary.

The council last month authorized a sale of the building for $1,728,500 to Aurora, which was contingent upon a finalized development agreement and the authorization of a $922,700 lien to the U.S. Department of Health and Human Services under terms of a Social Service Block Grant, a finalized lease agreement and (an authorized final purchase agreement of the former Texas Health and Human Services Offices at 5860 Ninth Avenue for $1.65 million, where the health department is expected to relocate.

Councilmembers voted 6-1 last month in favor of the Austin Avenue building sale, 5-0 Tuesday to authorize the lien and 4-1 Tuesday to purchase the Ninth Avenue facility.

Mayor Thurman Bartie cast the dissenting vote in the September and October votes. Bartie said in September he was not against selling the Austin Avenue building, but he wanted city officials to consider constructing a multi-purpose government facility across from city hall (444 Fourth St.), using the health department as an anchor as a way to invest in ongoing downtown developments.

City Manager Ron Burton said last month the health department was moving to a central location in the department’s service area — Groves, Port Neches and Nederland are also served. A timeline for the move is not known, but Burton told the council Tuesday he’s making sure the Ninth Avenue location is retrofitted for the needs of the PAHD.

He is also pursing two leads for grant funding to address the retrofitting costs.

“My main concern is that we are still able to provide services to the people that we serve for the many, many years we’ve been here,” said Smith, who’s worked in the department since 1983. She added city officials told her no programs or services would be lost because of the move.

This is not the first move for the PAHD, Smith said. It was located at 648 Fifth St. when she started, and then at 603 Fifth St. in the 1990s before relocating to Austin Avenue.

“We were all downstairs [at Austin Avenue] because we didn’t have the programs we have now,” Smith said. “We expanded with additional grant funds. In 2009, we expanded other programs. That’s how the upstairs were renovated.”

PAHD hired more workers at the beginning of the coronavirus pandemic in March through grant funding and turned a conference room into what Smith calls a “COVID station.”

The Ninth Avenue location, however, would facilitate possible expansion, Smith said. The department’s WIC (Women, Infants and Children) and immunization clinics attract its two largest populations of clients, and a large number of clients who are in the “child-bearing ages” live in the vicinity of the new location, Smith added.

Aurora Capital Holdings has acquired the Adams, federal and A.E. Scott Furniture buildings and is renovating them into a downtown office campus for personnel outside of the refinery. Moving the personnel would free up Motiva to expand within the refinery, Motiva deals manager Jay Hall told Port Arthur Newsmedia in September.