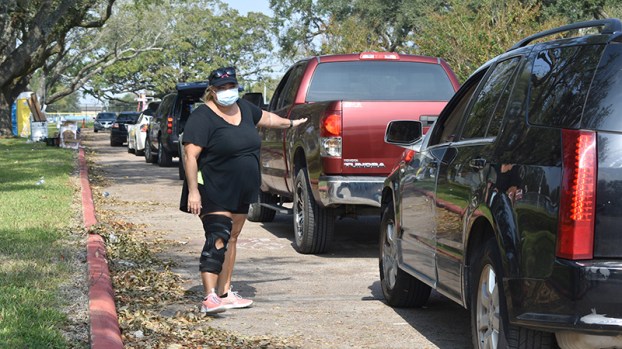 Olga Reasons directed car upon car as they drove through Barbara Jacket Park on Gilham Circle on Tuesday morning for food distribution.

The large knee brace she was wearing is for a medial collateral ligament issue and torn meniscus, but neither stopped her from taking charge of the distribution.

The giveaway was to start at 11 a.m. but when Reasons arrived at 6 a.m. to check the spot there were already 50 cars lined up. 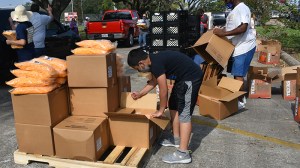 Oscar Mendoza opens a box during a distribution of food. Mary Meaux/The News

Reasons with Triangle Community Outreach partnered with the South East Texas Food Bank to hand out milk, cereal, fruit, shredded cheese and a box of items to create a meal. A slew of volunteers joined to make the distribution go quickly and smoothly.

One man, Whitney Como, walked up to the park and asked if he could help. Soon he was breaking down the many cardboard boxes and helping alongside others.

Reasons said someone donated 150 brooms and mops and those went fast.

The long line of vehicles snaked from Stilwell Boulevard at Gilham Circle down to Fifth Street, then turned back up Gilham around the Circle to the park entrance, where the items were placed in vehicles.

Reasons the giveaway is the right thing to do.

“I didn’t lose power and my house has all of the comforts,” she said. “I can’t sit at home knowing so many are in need.”

She said it also feels good to know the Food Bank trusts her and her organization enough to provide the items to be dispersed with love and kindness.

“I absolutely couldn’t see doing anything else,” she said.

The volunteers at the event were bilingual in English and Spanish.

Noemi Hernandez does not have a vehicle, so her neighbor, Viviana Garduno, drove her to the site.

“This means a great deal because we are truly in need,” Hernandez said through a translator.

As a sophomore last year, Memorial quarterback Jah’mar Sanders was given the difficult task of leading a high school team... read more