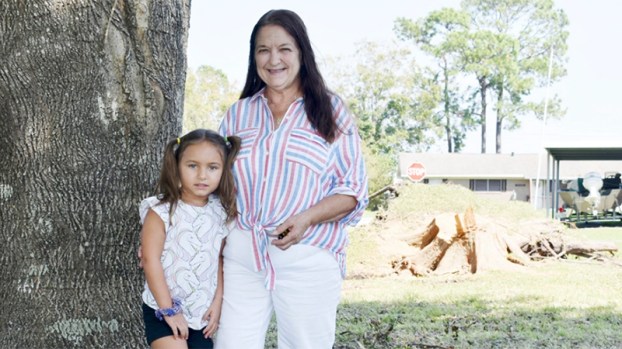 Carol Meadows, right, poses with granddaughter Autumn Hoffpauir, 5, outside her Nederland home. Behind the pair is the remnant of a large tree that was uprooted during Hurricane Delta, the top of which came to rest on Meadows’ home. (Mary Meaux/The News)

NEDERLAND — Southeast Texans are once again dealing with the aftermath of and picking up debris and making repairs.

Like many local residents, Carol Meadows of Nederland was home when Delta made landfall Friday in Cameron Parish.

The 80-plus mph winds felt locally was strong enough to uproot a large tree in her neighbor’s yard, causing it to touch a part of her roof. The tree was toppled on its side, pulling up roots along a green carpet of grass. Meadows said the tree fell at approximately 6:30 p.m. Friday during the storm.

“I believe Delta was definitely underrated,” Meadows said. “I saw the winds and it was worse than (Hurricane) Laura.” 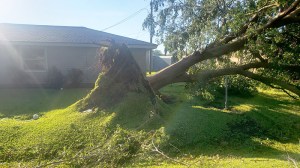 A large tree was uprooted during Hurricane Delta and laid over, touching the roof of Carol Meadows’ home in Nederland. (Courtesy photo)

The Central Gardens area woman said she had a long weekend off from the U.S. Postal Service in Port Neches but heard it was rough delivering mail Friday.

On Sunday, a crew came out and cut the tree down and she noticed Entergy trucks but still no power yet, she said on Monday.

“Delta definitely messed up plans but blessed no major damage besides loss of inside of refrigerator,” she said.

Jackie Strickland of Nederland said her home had damage from both storms but Delta led to water damage, the need for a new roof and damage to both of her porches. 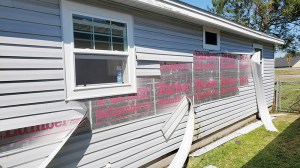 C.J. Moity of Groves had his fence blew down and some siding stripped off his home but is otherwise OK.

The Rev. Blake Alling of Calvary Baptist Church in the Port Acres area took to social media to offer help to those who may need it.

The church, 2208 Canal St., has electricity while other parts of Port Acres does not. He offered prayers, 5 gallons of gasoline as well as opening the church to anyone who needed to charge a device, get coffee, store some freezer items or come in and chat in the air conditioning.

“When you have part of Port Acres with electricity and the other part doesn’t, it makes it confusing and kind of frustrating to some,” Alling said.

A few people stopped by the church on Monday, one got gasoline, one borrowed a generator and some stopped by just to say hi.

He also received a lot of text messages and many thanks.

“Whatever we can do to help out the community,” he said. “We’ve been doing this dance together for a while.”

Bars and other establishments that account for at least 51 percent of sales from alcohol may reopen for business up... read more