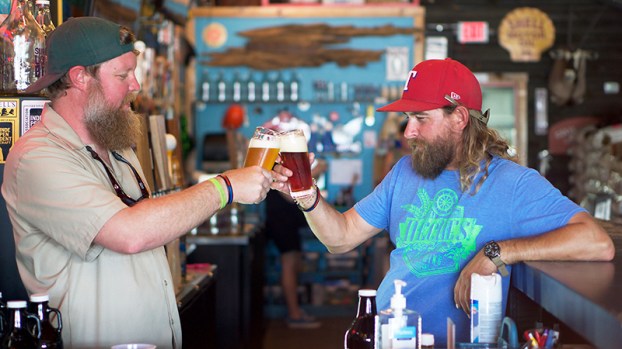 Bars and other establishments that account for at least 51 percent of sales from alcohol may reopen for business up to 50 percent capacity in Jefferson County as soon as Wednesday.

Neches Brewing Co. owner Tyler Blount, who operated a food truck near his Port Neches business on Thursdays through Saturdays since Sept. 12, couldn’t be happier.

“We’re not a restaurant,” Blount said Monday. “At one point, we did have a small kitchen in the back. Our whole goal was to make handcrafted beer, not hamburgers. That was a long time ago.”

Jefferson County Judge Jeff Branick confirmed Monday he has opted into an Oct. 7 order from Gov. Greg Abbott that allows Texas counties whose COVID-19 hospitalization rates have not exceeded 15 percent to have such establishments open, provided other restrictions are followed.

Jefferson County’s hospitalization rate reached 11 percent as of Oct. 2, according to data from Branick’s office. Branick said watching the rate and holding a conversation with judges from surrounding counties, whom he said are “doing the same thing,” led to his decision over the weekend.

Branick alleged some bars jumped the gun, so to speak.

“There are some bars that have been open claiming they’re more than 51 percent in food sales,” Branick said. “I know that is not correct. They’ve been packed. If you open some more up, you can at least spread some people out.”

Branick did not have an exact number on how many bars were open, but he said there were several.

“If you asked me 25 years ago, I could tell you, but my wife doesn’t allow me to go there anymore,” he said.

Blount feels previous orders from Abbott discriminated against the alcohol business in Texas.

“We were being discriminated against because he [Abbott] said bars are the reason COVID-19 was spreading,” Blount said, adding Neches Brewery is involved in a class-action lawsuit against him.

During an Aug. 11 news conference at the Jefferson County Courthouse, Abbott said bars “lack the discipline needed to social distance.”

“If we’re in a situation where we can get back to the May rate of low hospitalization rates … if all operators of bars and restaurants and similar establishments were to follow the same protocols that require patrons at bars to remain seated and not walk around and converse in small gatherings, that could lead to the reopening,” Abbott said then. “The fact is, the way bars are arranged, they are made for people to come close together.”

Abbott first shut down establishments where alcohol sales accounted for 51 percent or more of total revenue at the start of the coronavirus pandemic in March. Those businesses were allowed to reopen at up to 25 percent capacity on May 18 and shut down again on June 26.

Blount said what took four years to build up in savings was lost in four months due to the shutdown, adding he had to take out a Paycheck Protection Program loan and utilize other money sources to keep his business afloat.

“There were so many times I thought we were going to have to lock the door,” Blount said. “There was actually no data or contact-tracing on the bar industry to prove his point. That’s why it was so irritating.”

Bar and winery operators in Jefferson County said their businesses suffered greatly during the shutdown. Buckstin Brewery in Nederland, however, reopened in August after obtaining a license as a restaurant (meaning food sales account for 51 percent or more of total revenue). Neches Brewery followed suit, partnering with Taco Rey to provide a food truck.

The governor’s latest reopening plan requires bars to follow protocols including (but not limited to):

Blount said he would limit the use of the food truck right now. Neches Brewery doesn’t have a kitchen, but food items are allowed in the business.

“Brewing beer and having people here without government oversight, I always joke, are we still in America?” he said. “We work hard and are trying to provide for our families. COVID is obviously a serious thing, but there was no reason to shut us down for this long.

“We’re hanging in there, but we’re positive. I feel like there’s a reason this all happened and something good will come out of this. At the end of the day, we have a spirit.”

The increasing list of damage caused by Hurricane Delta includes two house fires, one in Nederland and one in Groves.... read more