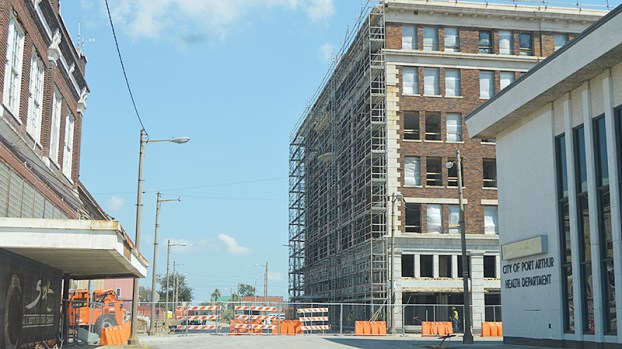 The Port Arthur Health Department, pictured at right, is located at 449 Austin Avenue.

The Port Arthur City Council is set to authorize a lease with Aurora Capital Holdings, a Motiva subsidiary, for the downtown property currently occupied by the Port Arthur Health Department at 449 Austin Ave. for a period of 18 months.

Motiva in September stated it plans to house “non-operational personnel” at the building.

Two more resolutions regarding relocation of the health department are set for voting on Tuesday’s council agenda.

One would authorize the city to pay a $922,700 lien to the U.S. Department of Health and Human Services under terms of a Social Service Block Grant, as requested by the Administration for Children and Families.

The other would authorize the city’s purchase of the former Texas Health and Human Services Offices at 5860 Ninth Ave. for $1.65 million to house the health department.

Votes on the resolutions will take place during Tuesday’s virtual council meeting starting at 11 a.m.

To watch the meeting, visit: portarthurtx.com/swagit.com/live.

The city of Port Arthur is proposing a drainage infrastructure revitalization and improvement project that would give the downtown area... read more