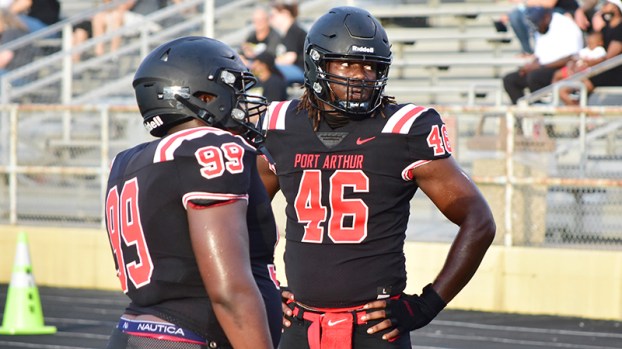 The Memorial Titans defense put on a show in La Porte, scoring two touchdowns in a 26-3 win over the Bulldogs on Thursday night.

The showdown marked the first district game for the District 9-5A Division I teams.

“I thought our defensive front matched up well,” Titans head coach Brian Morgan said. “I thought they had a good front and a good tailback. We knew they would try to run right at you and that fits our personnel and how our team is built around that defensive front. They stepped up and played really well.”

Not only was it tough for La Porte to move the ball against the stout Memorial defense, the Bulldogs struggled to hold on to the ball fumbling four times and throwing one interception to sophomore defensive back Jelani Chevalier.

Before the end of the first quarter, with a 6-3 lead, Titans senior defensive back Maleek Jones scooped a fumble and returned it 66 yards for a touchdown.

The Memorial special teams even got in on the action when Thomas blocked the Bulldogs punt, which set up a Titans touchdown on the next play.

In the fourth quarter, with the Bulldogs offense backed up against their own goal line, the Titans defense struck again when linebacker Darrell Thornton recovered a fumble in the La Porte end zone with 5:55 left in the fourth quarter.

Morgan said he challenged his team to be ready, knowing the Bulldogs would run right at them. The Titans held La Porte to 63 yards rushing on 29 carries.

“That offense is different than what you will see most of the time,” Morgan said. “Football has turned into a spread game. You don’t see it very much and sometimes it can shock you. It didn’t shock our guys. They stood up and battled. They really came out and showed their ability.”

“None of those three are easy games,” he said. “All of those are really good football teams. La Porte, on both sides of the ball, is a good football team. They are going to win a bunch of games in our district. To go one the road, you don’t have a crowd, you don’t have the band and there were no fans because of the weather. For those guys to step up and play a high level from the opening kickoff is special.”

PORT NECHES — A devastating third quarter lifted the Tomball Cougars over the Port Neches-Groves Indians 30-27 at The Reservation... read more