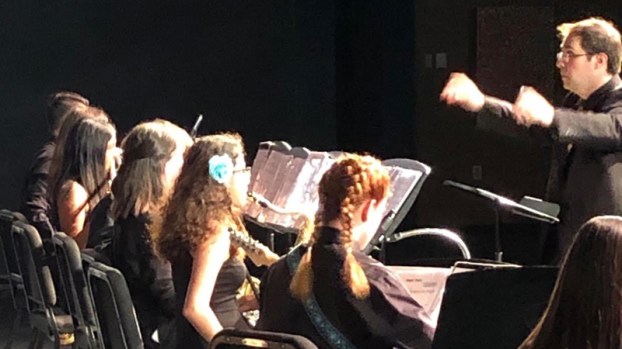 The Central Middle School Jazz Band in Nederland operates under his direction.

Central’s jazz band submitted recordings from public performances throughout the year last year to compete against all other Texas middle school jazz programs.

This means middle schools that feed into single A through 6A high schools all compete at the same level against each other, regardless of school size.

“Once submitted, each school’s submission would be reviewed by a panel of five judges, who would then decide which group was the best, and would receive the honor of being selected as the invited ensemble to perform at the Texas Music Educators Association convention in February,” Blake said.

Out of all of the middle school jazz bands in Texas that submitted recordings, Central Middle School’s jazz band was chosen the best group.

The greater Nederland Independent School District family celebrated this momentous accomplishment with a celebration press release Oct. 2, but some might have missed just how talented these local musicians are to have earned such a prize.

“To further put this into perspective, this can be likened to the football team winning the state championship against multiple divisions of teams,” Blake said. “Mr. Rose and I are extremely proud of our students for their accomplishment and the hard work that they have done this past year.”

One of the students who helped make this jazz band truly special is eighth grader Addilyn Currie, who will soon be featured in a Port Arthur Newsmedia “Bright Future” spotlight story.

She, along with her fellow jazz band musicians, found out before the Oct. 2 press release but were sworn to secrecy, not an easy assignment for pre-teens and teenagers.

In fact, Addilyn said Blake got the word about the best-in-Texas award during an actual jazz band class.

“You should have seen his face,” she told me when remembering the moment. “It looked like he had gotten news that he won the lottery. Of course, he started jumping up and down and couldn’t not tell us what was going on with a reaction like that. He actually told us then and there, and we all did our bit of screaming and jumping up and down. The thing was we couldn’t tell anyone or post about it until the thing was actually announced. We all had to keep our mouths closed until (the Texas Music Educators Association) announced the winners.”

Thankfully, according to Addy, her and the band only had to hold in the great news for a week. She was surprised nobody posted anything on social media.

In all actuality, that shouldn’t be a surprise, because the students of Central Middle School’s jazz band have proven to be an extremely focused and determined group.

They are capable of plenty when they set their minds to it.

“Everybody in jazz band has put so much hard effort, practice and love into the music we compiled to send in,” Addy said. “I didn’t want to get my hopes up just in case we lost but I did get my hopes up because I had a feeling. Even if we didn’t necessarily win first place, we were going to receive some recognition. Truthfully, the jazz band at Central is an exceptional jazz band. Each and every student puts in a world of work and passion. It is very inspiring. I really did have confidence in getting the award that we got. It was thrilling to actually hear the news.”

The top jazz band traditionally performs at the Texas Music Educators Association convention in February at the Lila Cockrell Theatre inside of San Antonio’s Henry B. Gonzalez Convention Center. Due to the COVID-19 pandemic, this year’s convention, along with all of the performances, will be held virtually.

The Central Middle School Jazz Band will begin preparing for this virtual performance, and performance details will be released in the coming months.

Stephen Hemelt is president of Port Arthur Newsmedia. He can be reaches at stephen.hemelt@panews.com or 409-721-2445.

When you pass them on the highway, you likely don’t pay much attention to the person sitting in the cab... read more