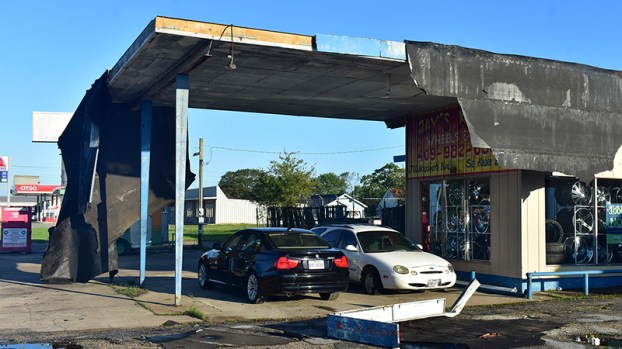 Citizens in Port Arthur woke up to a clear blue sky Saturday morning, traffic moving south of the Texas 73 corridor as normal.

That is, with the exception of some damaged stoplights.

Only one signal light was operational on Gulfway Drive between the Port Arthur-Groves line and Woodworth Boulevard. Some businesses sustained minor damage such as fallen roof work. The corners of some intersections remained flooded after an hours-long stream of rain and wind from Hurricane Delta on Friday. And few tree limbs were brought to the curb for pickup.

Plus, many thousands are without power.

As of 8:30 a.m. Saturday, there were 39,449 customers without power in the areas that include Groves, Nederland, Port Arthur, Port Neches, Sabine Pass and Taylor Landing. 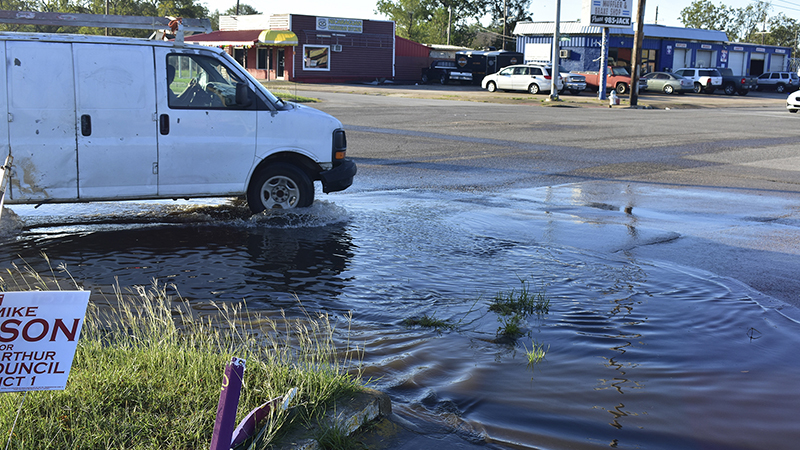 Despite the hurricane-force winds, Port Arthur Transit managed to complete its routes under normal hours Friday.

“We didn’t want to leave anybody stranded that we had just dropped off,” PAT Director Ivan Mitchell said. “We were pushing it, but we finished just as the weather really started to hit.”

More than 73,000 customers across Southeast Texas were without power as of 9 a.m. Saturday. Estimation times were not available.

Spectrum announced Saturday its crews would begin restoration of cable and internet services “as soon as conditions safely allow.” The local telecom provider added local power is necessary to restore or troubleshoot service.

Delta was the second hurricane impacting Port Arthur in the past two months, following Laura on Aug. 27. Tropical Storm Beta was reduced to a depression when it reached Port Arthur on Sept. 22.

Port Arthur Mayor Thurman Bartie and Jefferson County Judge Jeff Branick said they had not heard of any injuries or fatalities from Delta.

“I think it was that way, not from a city standpoint but from how strong the winds were,” Burton said.

The National Weather Service in Lake Charles said wind gusts reached 75 mph Friday and added the winds were longer and higher than during Laura.

No mandatory evacuation was issued in Jefferson County for Delta, unlike the case ahead of Laura.

“You have to issue a mandatory evacuation 48 hours in advance of the storm reaching the coast,” Branick said. “It was not forecast 72 hours out to have that much impact on us. By the time we realized it would, it was already 48 hours.

“The problem was that the highways 48 hours out were pretty full of people coming from Louisiana to Houston. I didn’t want the roads to become crowded and unsafe.”

Branick reported an 18-wheeler was blown over in the area of Texas 73 and 82 Friday, but the driver was OK.

He surveyed damage from Delta via aircraft Saturday morning.

“I did a flyover of Sabine Pass and Port Arthur over into Port Neches this morning,” Branick said. “I see some shingles and fences blown over and barns and sheds destroyed, but I don’t see major damage to homes. I see some vegetative debris.”

Bartie didn’t express any qualms about not mandating an evacuation. He had only asked residents of Sabine Pass and Pleasure Island to voluntarily evacuate because they were in low-lying areas.

“I had one citizen tell me, man, you didn’t issue a mandatory evacuation, and we have no lights in the city,” Bartie said. “But we’re on the good side of the storm. We’ll be all right.”

Delta strikes locally stronger than Laura; Weather Service says it needs “to study to see why”

If Hurricane Delta Friday afternoon and evening felt worse than Hurricane Laura six weeks ago, it’s because it was. Hurricane... read more