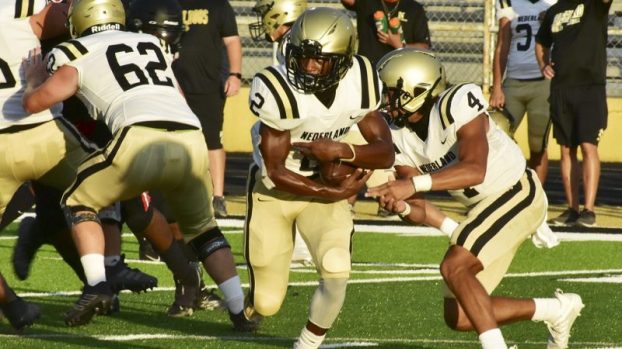 Josh Mazyck (2) of Nederland takes a handoff during a Sept. 17 scrimmage at home against Memorial. (I.C. Murrell/The News) 9-17-20

JACKSONVILLE — A superb rushing performance and dominant defense lifted the Nederland Bulldogs to a 42-20 win over the Jacksonville Indians at the Tomato Bowl Saturday.

This marked the final non-district game on Nederland’s (1-1) schedule.

The Bulldogs defense didn’t start out hot. On the second play of the game, Indians quarterback Patrick Clater found Devin McCuin for a 74-yard strike to give Jacksonville a 6-0 lead with a missed extra point.

Disaster struck on the ensuing kickoff when an odd bounce put the ball back in Jacksonville’s possession on the Nederland 28. The Bulldogs defense held strong, forcing a turnover on downs.

Four plays later, Mazyck found open room and scampered in from 35 yards out.

The senior running back added one more TD from a yard out before the end of the first quarter to give the Bulldogs a 14-6 lead.

With just more than 3 minutes left in the half, Kerrington Broussard picked off Clater at the Nederland 46, setting up a 54-yard touchdown run by Mazyck to give the Bulldogs a 21-6 lead.

After a pair of punts, junior Kyndon Fuselier picked off Clater at the Nederland 27. Two plays later, quarterback Rene Cunningham rewarded Fuselier with a 54-yard touchdown strike. After a pick by Lalo Flores, the Bulldogs went into the half up 28-6.

Former running back Kade Scott got on the board, but this time it was in the form of a 21-yard pick-six to make the score 35-6 with 30 seconds left in the third quarter.

“Kade is a great athlete,” Mazyck said of his former backfield mate. “He can play anywhere on the field. I was actually telling him before the play that I want a pick-six and he brought it to me.”

On the very next play from scrimmage, Evan Whitehead got in on the action with an interception.

Mazyck finished Nederland’s scoring with a 34-yard run with 10:05 left in the game before Jacksonville narrowed the gap with a pair of touchdowns.

“We took a three-hour bus ride,” head coach Monte Barrow said. “We had to figure out within ourselves how we get off the bus and prepare for those games mentally. We are going to go on road games in our district. On the flip side, we had some outstanding performances. Josh did a great job of adapting to what they were doing.”

Jacksonville fell to 0-3 on the season.

The Indians were in position to take a two-score lead. The Bulldogs defense held strong and gave the ball back to the offense, which scored 35 unanswered points.

The Nederland defense, which racked up six turnovers, and Mazyck, who had more rushing yards at halftime (135) than the Indians had total offense (134).

“I just saw an opportunity today,” Mazyck said. “I wanted to make up for last week. I could’ve done some stuff better and this was the first game back. I came out here and showed what I could do.”

The Bulldogs have a bye week before they take on Port Neches-Groves in the Bum Phillips Bowl Oct. 23. The matchup will be the first District 12-5A Division II game for both teams.

The Memorial Titans defense put on a show in La Porte, scoring two touchdowns in a 26-3 win over the... read more