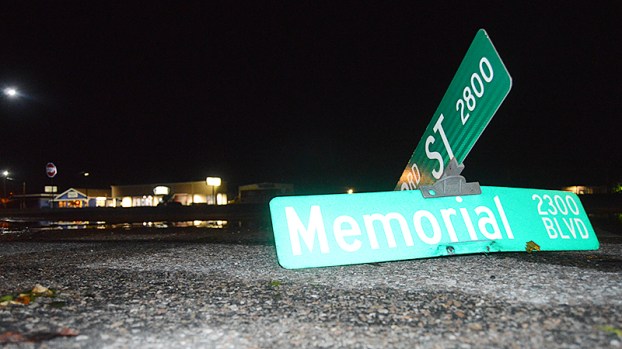 A Memorial Boulevard street signs sits in the parking lot of The Port Arthur News building after hurricane winds knocked it down.

Much of Port Arthur and Mid-County are without power as the sun begins to work its way up into the Saturday morning sky.

The winds and impact of Hurricane Delta were significantly more than local officials or area residents anticipated, as no mandatory evacuations were called prior to the storm’s landing in southwest Louisiana.

There is extensive wind damage across the region that will be easier to evaluate as the day’s sun shines some some light on a region hard hit by the category 2 hurricane’s impact.

As of 6 p.m. Friday, Entergy Texas reported more than 67,000 customers without power primarily in Beaumont, Orange, Port Arthur and Winnie. That number has surely risen to more than 100,000 as of Saturday morning across Southeast Texas.

Entergy said after assessing damage to its system, it would provide an estimated restoration time and other information about local outages.

That was not available as of 5 a.m. Saturday, as Entergy seems to be in the same position as most of the region.

A Nederland man and woman who reportedly made a man sit in a corner while burglarizing his home were indicted... read more