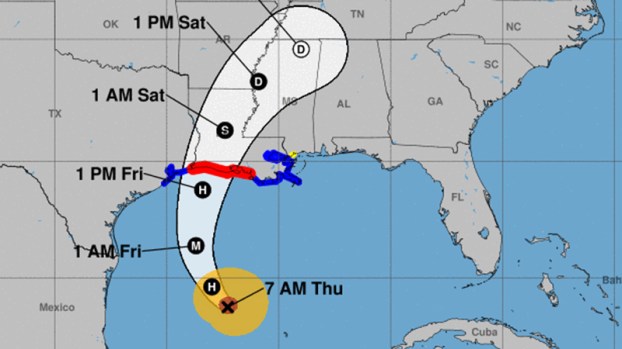 Hurricane Delta is moving northwestward over the Gulf of Mexico, and hurricane conditions and life-threatening storm surge impact is expected to begin along portions of the northern Gulf Coast on Friday.

As of 7 a.m. Thursday, the National Hurricane Center says a Storm Surge Warning is in effect for Sabine Pass.

A Storm Surge Watch is in effect for Sabine Pass.

A Hurricane Warning is in effect for East of Sabine Pass to Morgan City, Louisiana.

A Tropical Storm Warning is in effect for San Luis Pass, Texas to Sabine Pass east of Morgan City, Louisiana to the mouth of the Pearl River, including New Orleans, Lake Pontchartrain and Lake Maurepas.

A few tornadoes are possible late Thursday night through Friday over southern parts of Louisiana and Mississippi.

According to the latest National Weather Service, the latest projection possibilities call for Jefferson County to experience winds of 40 to 50 mph, with gusts of 60 mph., storm surge of 2 to 4 feet, rainfall totals close to 6 inches, no tornado threat and isolated power outages.

Thanksgiving is just seven weeks away and now is the time to help your fellow man if you are in... read more