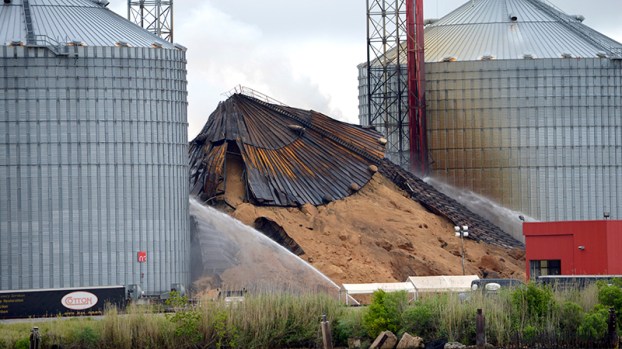 The site of a collapsed silo owned by German Pellets. The silo, which had smoldered for more than 50 days, collapsed. (Mary Meaux/The News)

Port Arthur Community Action Network representatives believe the organization’s concerns over a $12,000 fine handed to German Pellets led to the Texas Commission on Environmental Quality’s ongoing consideration of updates to its penalty policy.

Amy Dinn, managing attorney with Houston-based Lone Star Legal Aid, testified during a hearing with TCEQ in Austin on Jan. 15 that a fine against German Pellets, a wood pellet facility on the Port of Port Arthur that sustained a fire for 102 days from April to July 2017, should have been more than $15,000 for nuisance odor violations.

German Pellets paid $12,000, with $3,000 deferred. But TCEQ spokesperson Brian McGovern said Monday the proposed revisions will not impact the commission’s enforcement order against German Pellets, which was approved on Jan. 21.

“If the commission adopts a revised penalty policy, it will apply to all enforcement cases assigned on or after the effective date of the new policy,” McGovern said.

On Jan. 30, PACAN Chairman John Beard, Lone Star Legal Aid attorney Colin Cox and Dinn met with TCEQ Chairman Jon Niermann in Beaumont regarding penalty issues involving German Pellets, Intercontinental Terminals Company (which caught fire for days in the Houston area in March 2019) and TPC Port Neches Operations (which exploded on Nov. 27, 2019) and what Dinn called “the ineffective imposition of penalties to foster real change at facilities from an operations and maintenance standpoint.”

Dinn also noted an explosion at Watson Grinding and Manufacturing in Houston had occurred on Jan. 25, killing two people.

“We believe the chairman listened to these collective concerns and made this productive proposal happen to address these series of events since 2017 that have adversely affected communities (meaning clear impacts outside of the fence line),” Dinn said. “The proposed revisions specifically address issues we raised directly with the commission in writing and in person for several years.”

The TCEQ last revised its policy April 1, 2014, and is accepting comments on proposed revisions through Oct. 30. (Comments may be emailed to penalty_policy@tceq.texas.gov.)

TCEQ commissioners will then be presented the comments for consideration at a future commission work session or agenda.

Residents who lived near the port complained to TCEQ of coughing, headaches, dizziness and breathing problems, according to a lawsuit Lone Star Legal Aid filed against the TCEQ over its penalty policy in Travis County District Court in February. The case is still pending.

Dinn complained to the TCEQ an “actual moderate violation” on the part of German Pellets should be calculated as an “actual major violation” in accordance with the penalty policy and that the violation was calculated as four separate events in which TCEQ “called” a nuisance instead of a continuing violation over which the nuisance events occurred at least 22 days which TCEQ staff noted.

In the lawsuit, Lone Star Legal Aid charged TCEQ with failing to assess the conditions as “major harm,” the 30 percent assessment of the penalty for a minor source. The event was “minimized,” Lone Star alleged, to “moderate harm,” or 15 percent, which reduced the base penalty from $7,500 to $3,750. The $15,000 fine was determined as a result of $3,750 for each of the four days TCEQ called a nuisance.

A key change to the penalty policy, if approved, would increase the percentage for actual releases to better distinguish between actual and potential releases. A 30 percent assessment for major harm by a minor source would be increased to 50 percent, and a 15 percent assessment for moderate harm by a minor source would increase to 25 percent.

PACAN representatives suggest a penalty should have ranged from $165,000 to $405,000 for 22 to 54 days of observed nuisance at $7,500 per day or $720,000 for 96 days, the duration of a continuing fire event from April 15 to July 21 as noted in a TCEQ incident report. The 22 days refer to specific dates where TCEQ staff detected nuisance conditions offsite and 54 is the number of days prevailing winds generated a nuisance.

During the fire at German Pellets, according to the lawsuit, TCEQ issued shelter-in-place warnings for children, elderly and those with heart and lung problems. Meanwhile, thick black smoke entered homes and cars while also contaminating personal belongings, and persons who battled respiratory problems were hospitalized.

A woman who lived on West Sixth Street died on or about June 7, 2017, before her daughter could take her to the doctor, according to the lawsuit. Her body was discovered three days after a silo at German Pellets collapsed.

In a memorandum, TCEQ enforcement division director Bryan Sinclair stated statutory changes from the 2019 Texas Legislature have occurred and recent incidents “have caused significant impacts to the public and the environment demanding accountability within the bounds of TCEQ authority.” The proposed revisions are intended “to promote a deterrence to future noncompliance by using additional tools within the Policy to impact the assessment of administrative penalties,” Sinclair stated.

Beard deferred detailed comment to Dinn, but posted on Facebook: “Let it be known that PACAN was integral in challenging TCEQ’s methods on German Pellets, TPC and others, to make penalties a true deterrent against polluters.

“PACAN will continue to seek justice and equity for Port Arthur and its citizens.”

A copy of the proposed penalty policy changes can be found at: https://www.tceq.texas.gov/assets/public/comm_exec/agendas/worksess/backup/2020-09-24/PP_CH.pdf

PNG ‘going to figure out’ cure for first-half woes

The potential for inclement weather from Hurricane Delta caused Port Neches-Groves and Tomball to move up their non-district matchup to... read more