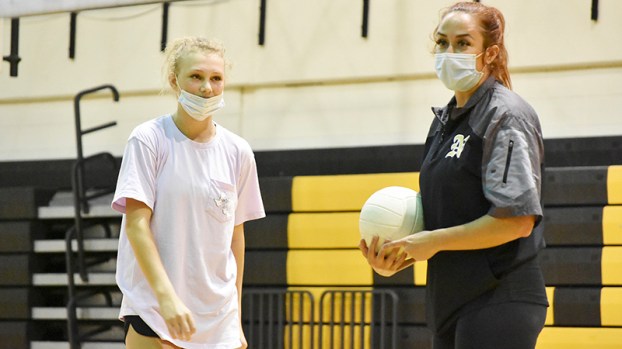 The Nederland volleyball team is off to a hot start after winning a District 21-5A opener 3-0 against Memorial on Tuesday.

“I feel like since we dropped those two matches to Magnolia West and Kingwood Park, we worked on finding our footing and what rotations are going to work for us,” Bulldog head coach Allie Crommett said. “They have played a lot smarter volleyball. They go in a swing when they need to and have a better grasp of reading the defense and figuring out where to put the ball and come out with some points.”

“Right now, Katie Perez, who is a six-rotation player that plays on the outside, has been really solid for us,” Crommett said. “Our setters know they can rely on her if we get in a bind. She is really good defensively, too. Rylee Bolser has stepped up, too, and has done a good job in the middle. Them elevating their level of play has made everyone else rise to the occasion.”

After Friday, the Bulldogs could be without a game for more than a week following Crosby’s announcement of a district-wide shutdown after 10 students were diagnosed with the coronavirus.

The Bulldogs were scheduled to play against Crosby on Tuesday. Crommett said the team will not travel to Jacksonville Oct. 10, making the Bulldogs’ next scheduled game against Barbers Hill Oct. 13.

Crommett said she is trying to find an opponent to replace Jacksonville and expects the match against Crosby to be made up on a Saturday.

“We have a bye (Oct. 9),” Crommett said. “We are talking to (Little Cypress-Mauriceville. They also have a bye that Friday. We really want to play another game before we play Barbers Hill.

The Bulldogs’ head coach said her players approach each game with a similar mindset.

The match against United Timberwolves begins at 6:30 p.m. Friday at Nederland High School.

The Port Arthur Independent School District is receiving an assist from the city of Port Arthur toward technology costs during... read more